Seahawks kick off against familiar foe 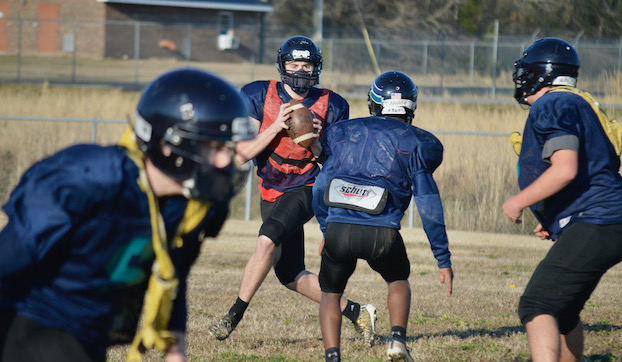 The normal three month fall football season has turned into a six game early- spring sprint for the Southside Seahawks.

After their opener last week against Swansboro was cancelled because of COVID-19 issues within the Pirates program, Southside will host county rival Northside in a non-conference game Friday at 7 p.m. The two will meet again in the season finale next month.

“We were both struggling to find an opponent for Week 2 when we were trying to get the schedule together,” Northside coach Keith Boyd said. “We figured we might as well play twice, rather than have a bye week when the schedule was short already. It worked out well for them since their opener got cancelled.”

Boyd’s Panthers rolled over North Duplin, 36-0, behind senior James Gorham, who ran for 222 of the team’s 382 rushing yards. Boyd said before the season started that the offensive and defensive lines would hold the keys to success and that theme continues.

“I learned a long time ago to go with what’s working,” Boyd said. “We’re not going to try to outcoach ourselves and overthink things, so we’ll try to do the best we can running the ball.”

The Seahawks return eight seniors from the 2019 squad that went 4-8 and 2-4 in the conference, including quarterback Hundley Stallings and running back Davion Carter. The duo is set to sign their scholarship papers Friday to continue their careers, Stallings with Missouri Valley College in Marshall, Mo. and Carter at Wingate.

“I’m really proud of both of them and we are counting on them to make some plays for us,” Seahawks coach Jeff Carrow said. “Hundley is set on playing quarterback in college and they (Mo. Valley) gave him the chance and I think Davion will help Wingate. We are excited to see what they give us during their senior season.”

Carter led the 2019 team with 907 rushing yards and 11 touchdowns and will contribute in the secondary on defense.

“He is our all-around best player and will help us on both sides of the ball,” Carrow said. “He has the speed to make plays in space.”

The Seahawks will rely on junior James Main (220 lbs.) and sophomores Xavier Ham (295) and Elyjaih Baldwin (321) to anchor the offensive and defensive lines. Freshmen Tequon Moore and Jamie Corprew will shore up both sides as well as

“We need everybody to step up for us because we only have 29 guys on the team this year,” Carrow said. “COIVD-19 has really hit us hard with eligibility problems and players opting out for health reasons. It would have been a lot easier if our kids were actually at school every day so we could encourage them more.”

“We’ll take anything at this point,” Carrow said. “It’s good that we are home for the first part because that will let us get our feet under us a little bit. It’s been hard to practice on the field with all the rain we’ve had, so we’re just happy to finally get started. It’s hard to remember what Friday night on the football field feels like.”