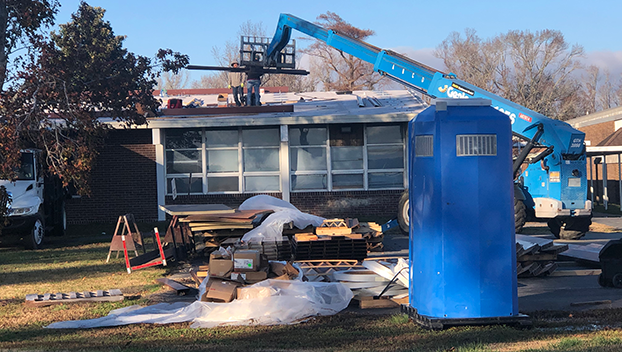 MATERIALS: All materials for the replacement roofs are currently on site. Construction continues on all three roofs at this time and should be completed soon. (Photo submitted by Hyde County Schools)

Hyde County Schools have several projects underway to improve the learning environment of students both inside and outside of the classroom.

The Mattamuskeet Campus in Swan Quarter is currently undergoing renovations. These renovations focus on the complete replacement of roofs on three buildings on the campus that make up the Early College.

Buildings 500, 600 and 700 were damaged by Hurricane Dorian and repairs have recently started following action from FEMA and having estimates done.

During previous roof repairs, additional layers of roofing were laid on top of the existing layers. Because this had been done multiple times, the roofs had to be completely removed and redone.

“Architects developed a plan to go in and boar down through the tarred roofs that are on there now  into the concrete and then put a pin in that concrete that would stick up above the roofs,” said Superintendent Stephen Basnight. “Then they would come back and add basically an I-beam on top of each one of those pins and tie the roof together so that we could replace the roofs by adding sheet metal on top of the roofs.”

The three new roofs will all be metal. Construction is almost done on building 700 and all materials needed for the three roofs are on site.

The estimated budget for this roofing project was $1,000,000. It has been determined that the project will come in under budget at $848,000.

In addition to the roofing project, the Hyde County Bus Garage is in need of repairs. The planning process of this project is ongoing and the superintendent hopes work can begin soon to ensure the facilities are up to par.

“We have not started the process of the bus garage yet. We’re trying to make sure we have everything squared away with financing,” Basnight said.

In Ocracoke, construction is currently underway on a new school following the damage incurred by Hurricane Dorian. The final cost of the new facility is expected to be around $5,000,000 once completed.

AURORA – The town board held its monthly meeting on Monday and discussed proposed budgets for the next fiscal year... read more