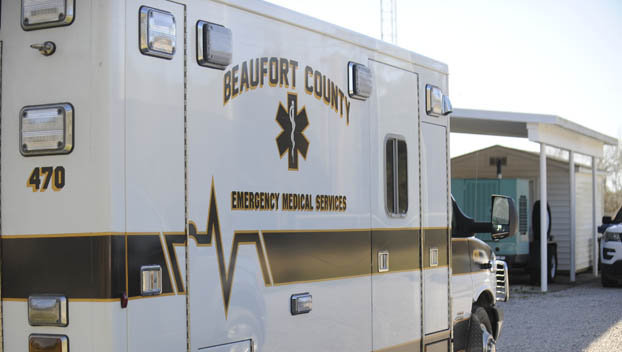 With a 4-3 vote, The Beaufort County Commissioners on Monday approved a set of three recommendations from the Emergency Medical Services System Oversight Committee, all three of which were designed to address areas of concern relating to call volume, response metrics and call responses among three agencies the county contracts with.

The commissioners were divided over a recommendation concerning Washington Fire and Rescue.

Citing issues stemming from a high volume of mutual aid calls, the committee said Beaufort County EMS should “request through contract that Washington Fire and Rescue staff a second EMS unit to provide paramedic care to all patients.”

Washington had two fully staffed EMS units until a couple of years ago, the report says.

“When (Washington Fire and Rescue) dropped to one unit, (Beaufort County) Emergency Services was advised that this would be a temporary measure until adequate personnel were hired,” the committee’s report reads. “While the data reviewed only covered the past year (2020), it clearly showed outside EMS units responded to 340 calls in the city.

“It is our observation that these events, in turn, required WFR to respond to more mutual aid calls outside the city because the outside units were responding to the city.”

The committee recommended that the potential second unit be staffed from 8 a.m. to 8 p.m., the main time frame in which outside agencies were taking calls within the city.

“All of these (EMS) contracts are going to be renewed in July of this year,” Richardson said. “What is your intention for the City of Washington if they don’t put another truck on? Are you not going to renew mutual aid with them? I think if this board votes to support this tonight, you’re starting another contention with the City of Washington, trying to force them to do something that they may or may not want to do.”

“I think the city needs to be given a chance to say what they would need to get this to work properly,” Walker said. “This coming forth by us voting tonight, it does that — it gives it a little beef. And you (Beaufort County EMS) present to them — (ask them) what is it going to take for you to correct this problem? And they’re going to tell you, and you’re going to come back to us, and we’re going to be able to know what to do.”

Beaufort County Emergency Services Director Carnie Hedgepeth said there are no EMS volunteers available in the Pamlico Beach area, and the department doesn’t have the call volume or income to attract volunteers.

“Pamlico Beach, they are the only department left in the county that fire and EMS is under one nonprofit — they’re one organization, where everybody else is two,” Hedgepeth said. “So stopping funding for EMS is going to affect the funding operations for the fire department to some degree.
“They’re strategizing — they’re looking at possibly being able to do something different of first-responder units. They’re not ready to come back to us with that. They understand they’re not making the calls that are being missed.”

The committee’s third recommendation had to do with Pinetown EMS, which was having issues meeting daytime calls on weekdays because of a lack of providers locally during the workday.

Hedgepeth said his department had met with Captain Butch Oliver to discuss those issues, and from that conversation came a plan to improve Pinetown’s coverage and response rates.

The committee recommended taking no immediate action in regard to Pinetown EMS. The committee suggested that the Office of Emergency Services should conduct a six-month review and report its findings at the committee’s July 13 meeting.