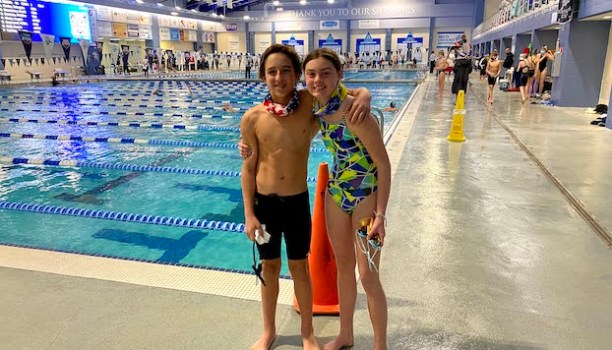 12 year-olds Evan White and Aubrey Woolard competed in the North Carolina 14-under championships in Cary. 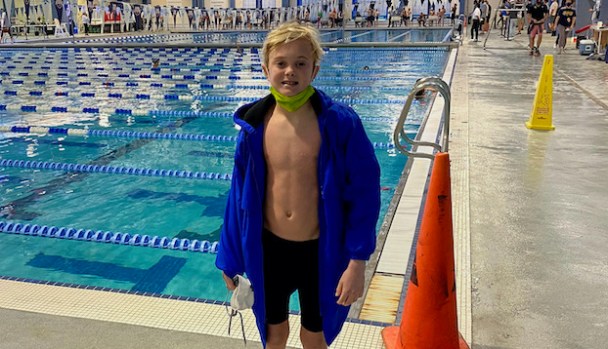 10-year old Miller Tyson, 12-year old Evan White and Aubrey Woolard, also 12, competed in multiple events in the North Carolina 14 and under championships at the Triangle Aquatic Center, as part of the Junior Olympics.

Over 60 swimmers qualified for each event based on their fastest time during regular season competitions.

“We had about half as many meets as usual because of COIVD-19, so these kids did really well to qualify for the state meet,” Washington coach and ECA general manager Scott Pake said. “All three of them swam personal best times and competed very well within their age group.”

Tyson bested his qualifying time in the 10-under 100 freestyle by almost three seconds and finished 32nd with a time of 1:08.52. He swam the 50 freestyle almost a full second faster to finish 28th in 30.61 seconds.

Woolard advanced to the girls Eastern Section Southern Zone 11-12 Championship next weekend in Cary with a 50 freestyle time of 26.67 seconds, good for 29th place.

“These kids along with the rest of my group have worked hard all winter, sometimes four or five days a week,” Pake said, a former Washington High School swimmer who graduated in 1996. “We have around 40 girls and boys from age six to high school seniors who put in anywhere from 45 minutes to an hour and a half in the water after school.”

The group swims at the Hildred T. Moore Aquatic & Fitness Center at the McConnell Sports Complex in Washington.

“We have four groups who rotate in and out of the water to comply with COVID-19 restrictions,” Pake explained. “While one group is in the water, the others are doing their workout of push-ups, sit-ups and other core strength work to help them swim faster.”

Pake said the program shut down about this time last year, didn’t re-open until June and didn’t compete until November.

“We did lose quite a bit of development time, but we did what we had to do to make sure everyone stayed healthy,” Pake said. “I’m really tickled with Miller, Evan and Aubrey’s progress and they have great potential if they stick with it. They love being in the water together and competing against the best swimmers in the state.”