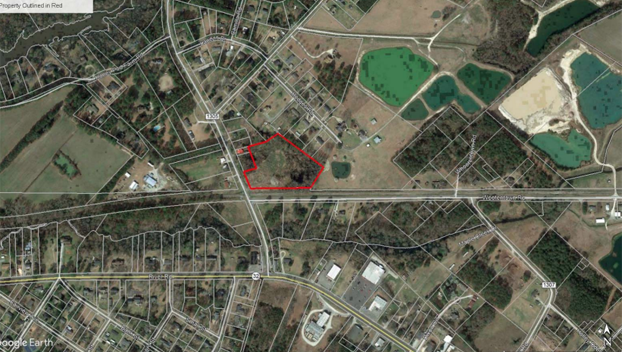 For the third time, Steve Fuchs is seeking the rezoning of his 4.98-acre property located just northeast of the intersection of Brick Kiln and Whootentown roads in Washington.

The first two requests, which were addressed in April and July 2020, were approved by the Washington Planning Board but denied by City Council. The property is currently zoned residential agricultural (RA20). Fuchs’ first request sought to change that to residential (R15S) zoning. When that failed, Fuchs tried to have the zoning changed to office and institutional, but City Council denied the request.

Fuchs is again seeking to change the property’s zoning to office and institutional, which meets the terms set forth in the city’s 2013-2023 Comprehensive Plan. This time he is represented by an attorney, Aaron D. Arnette of the New Bern firm Sumrell Sugg. In a letter to City Attorney Franz Holscher, Arnette claimed that City Council‘s conduct the previous two rezoning attempts would support a claim for equal protection violations, should Fuchs decide to go that route. Click here to read the letter.

“(The city) can’t treat me differently than everybody else, and that’s the bottom line,” Fuchs said in a phone call Thursday with the Daily News.

Fuchs says he wants to have the property rezoned so that it will be in line with the Comprehensive Plan, and also so he can potentially sell the property to a developer.

The planning board has already recommended that City Council deny Fuchs’ newest request. At its meeting Monday night, City Council will decide whether to accept or deny that recommendation. Before the vote, a public hearing on the matter will take place at 6 p.m.

Fuchs purchased the property as an investment in 2018.

“For decades it was an old lumber mill,” Fuchs said Thursday. “When I bought the property it had great big logs all over it. It was full of trash. There was an old singlewide mobile home there and it was gutted out. It was just a big eyesore. I spent about $20,000 getting all that stuff cleaned up.”

In February 2020, the planning board unanimously approved a motion to recommend that City Council approve Fuchs’ request to change the property’s zoning to residential. The recommendation then went to City Council for a final decision.

A public hearing was held in March; during that hearing, in response to a question from then-Mayor Pro Tem Donald Sadler, Fuchs noted that he didn’t have a final plan in place for the property at that time.  According to the meeting minutes, Holscher reminded Council that they are not supposed to ask rezoning applicants about proposed uses; instead, they need to consider all potential uses for the zoning district.

At his own request, Fuchs’ rezoning vote was continued until the April City Council meeting.

Prior to the April meeting, Washington resident Dorian Miller — who already had spoken against the rezoning at the public hearing — submitted a petition signed by 24 local property owners to City Council requesting the denial of the rezoning request, accompanied by a short letter.

“If the rezoning request to R15S is approved,” the letter reads, “it allows two–family and multifamily (apartment) use, which we are opposed to. The entire surrounding are all single-family homes, including Runyon Hills, Brick Kiln Road, Smaw Road and Honey Pod Farm. The drainage and flooding issues adjacent properties already experience will only be exacerbated by every square yard of pavement/impervious material used on this particular tract of land.”

In comments he emailed to Council before that meeting, Fuchs noted that adjacent properties were already zoned residential.

“When the city annexed this property into the Washington City Limits many years ago, this property was zoned RA20 while all the adjoining properties were zoned R15S,” Fuchs wrote. “It was zoned RA20 because it was a Lumber Mill. If the Lumber Mill had not been there, I feel certain the City of Washington, at the time of annexation, would have zoned the property R15S, the same as all the adjoining properties.”

Councilmembers Virginia Finnerty and William Pitt advocated for the council to listen to neighbors who were concerned about the outcomes of apartments potentially being built on the property. Councilwoman Betsy Kane was concerned about a potential increase in traffic that a new housing complex could bring.

City Council then voted to deny the planning board’s recommendation to approve the rezoning request.

In July, following another unanimous approval by the planning board, City Council reviewed another rezoning request for the same property — this one filed by Michael Weaver of the Pendergraph Company in Raleigh. Weaver requested to change the zoning from residential agricultural to office and institutional. Fuchs said the company was interested in potentially putting a commercial building there, although the exact plans weren’t established at that time.

In response, Miller submitted another petition against the rezoning — this time with 30 signatures of local property owners.

Recognizing that the requested rezoning was consistent with Washington’s land use plan, City Council again voted to deny the rezoning request, citing concerns they’d heard from local residents during the public comment period, as well as the petition.

“The only reason they gave is because of what the residents said,” Fuchs said. “They never gave me any reason why they voted against their own (Comprehensive Plan).