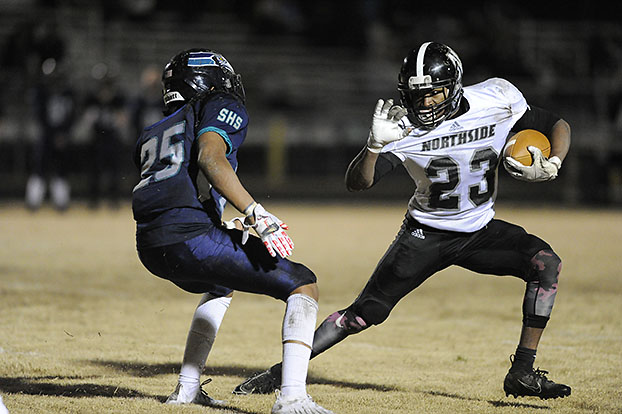 Veteran observers are trained to expect the unexpected when old rivals clash. Southside hosted Northside Friday night and it took a defensive stop after a long march for the Panthers to prevail 17-12. View a photo gallery from the game.

Northside (2-0) struck quickly with touchdowns on its first two possessions. However, Southside had plenty left and almost pulled off a victory.

Senior Payton Woolard burst around the left side for a 59 yard run down to the one yard line on the first play of the game.

Two plays later quarterback Keifer Boyd found Tyler Modlin in the corner of the endzone for the first score.

Southside threw an incomplete pass on a fake punt on their first possession, giving Northside the ball at their 38. Boyd and Modlin hooked up for a 24 yard scoring pass on second down for an 14-0 lead and it looked like the rout was on.

“They woke us up quickly with those two scores, but we found our feet defensively and didn’t let them have anything else,” Seahawks coach Jeff Carrow said. “Our defense is so much better than it was last year, and we played great the rest of the game.”

Southside senior quarterback Hundley Stallings put his team on the board late in the first half, then the Panthers answered with a field goal for a 17-6 halftime lead.

After a scoreless third quarter that featured defensive stands on both sides, the tide started to turn when Southside defensive back Kenjray Coffield hit Boyd to force a fumble that teammate Xavier Ham recovered at the Panthers nine yard line with nine minutes left in the game.

Senior Davion Carter scored from eight yards out to make it 17-12 with eight minutes left.

Northside countered with march to the Seahawks one yard line, where the defense held and gave the home team one last shot with 99 yards to cover with 2:45 left.

Carter and Coffield gave Southside some breathing room with back to back 10 yard runs, then Stallings found Coffield for a 45 yard bomb to the Northside 30 with 1:55 to play.

It was the Panthers turn to come up with a big play and Woolard recovered a fumble after a big hit on fourth down from the 18 yard line to ice the win.

“There is no doubt our defense won this one” Northside coach Keith Boyd said. “We both had defensive stands, but ours was at the end. It was two rivals getting after each other and neither side gave an inch. Southside has an excellent team.”

This was the Seahawks opener after last week’s game was cancelled because of COVID-19 issues.

“I never feel good after a loss, but I’m really proud of our guys for the way they battled,” Carrow said. “We are leaps and bounds ahead of where we finished last season and I’m looking forward to a great week of practice to keep improving.

The Seahawks host Pamlico County Friday while the Panthers travel to South Creek.