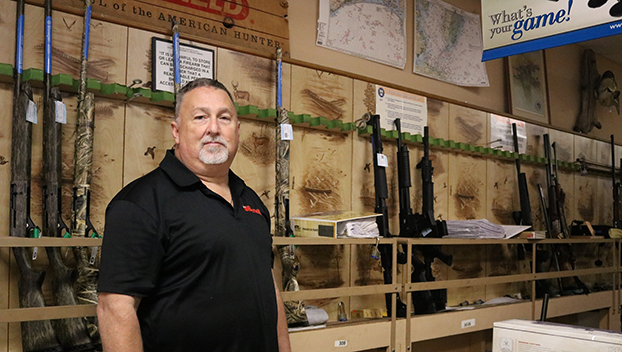 HIGH DEMAND: Tracy Warren, owner of Warren's Sport Headquarters in Washington, said his business has experienced a significant increase in the sales of guns and ammunition. Because of the high demand, Warren said he has had difficulty keeping inventory in stock. (Chelsea Hofmann / Washington Daily News)

The number of permits issued to purchase handguns and carry concealed handguns in Beaufort County more than doubled from 2019 to 2020, according to statistics recently compiled by the Beaufort County Sheriff’s Office.

“As far as the numbers go, I know that there was a spike pretty much all of 2020 compared to 2019,” said Chief Deputy Charlie Rose.

Handgun purchases and licenses to carry concealed handguns each require a permit, which must be approved by the Beaufort County Sheriff’s Office. Applicants are required to be at least 21 years of age, a citizen of the U.S., have lived in Beaufort County for at least one month and provide a valid driver’s licence or photo ID with proof of a North Carolina address.

“At times, we were running double the amount of new applications. Once you get your permit, every three years you have to renew it so every time we have an uptick in new applications then we’re going to have more renewals to do,” Rose said.

The local increase in permit applications is similar to both state and national statistics according to the Bureau of Alcohol, Tobacco, Firearms and Explosives. Those stats also reflect an increase in gun sales.

“In the month of June in 2020, I had sold more guns than I had in all of 2019,” said Tracy Warren, owner of Warren’s Sport Headquarters in downtown Washington.

“Anything that I get, I can sell,” Warren said. “It’s just been a phenomenal number of sales. Right now, ammunition is very difficult to get. Coming off an election year always has a heavy hand in it. And it’s not necessarily the pandemic, but the riots caused a little fear-purchase so you had people start buying stuff for home protection.”

Rose also partially attributes the rise in sales during 2020 to the presidential election and unprecedented events like the pandemic.

“The idea that people want to do something and something as simple as making a purchase of a gun at a time where that’s really the only thing they can control, they do that,” Rose said.