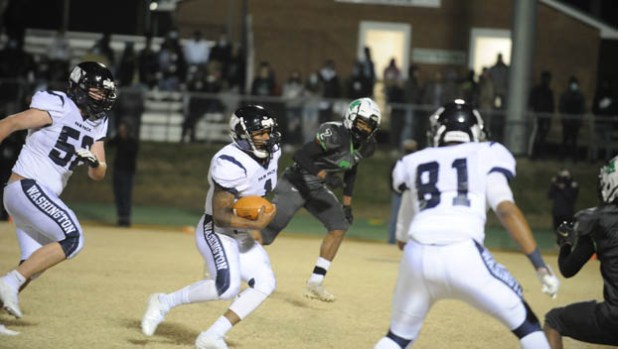 Washington's Jaden Hambric looks for a gap to run through at North Lenoir on Friday. (Brandon Tester / Washington Daily News) 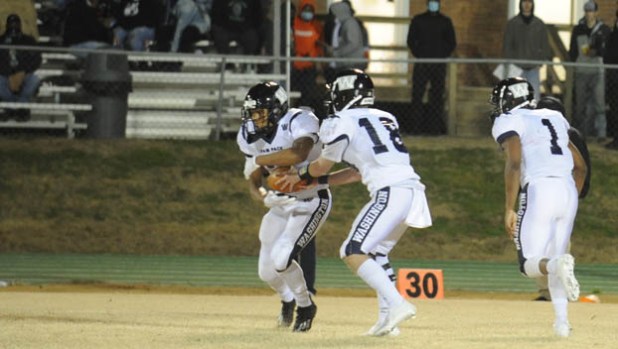 LA GRANGE — In its first game since November 2019, the Washington High football team made big plays in all three facets — offense, defense and special teams — on its way to a 41-19 win at North Lenoir (1-1).

“We pride ourselves on being great in all three phases,” Washington head coach Perry Owens said. “You see a lot of starters playing on special teams. Hats off to (North Lenoir), they did a heck of a job putting us in a bind with their triple option in the first half. We made some great adjustments at halftime, put them in a bind, made them punt.

“But I’m so proud of the defense and I’m so proud of special teams coming up with some big kicks and some blocked PATs. Those things are going to matter when we’re playing for the conference championship, because that’s our expectation.”

After Washington entered halftime with a 20-13 lead, Hambric’s touchdown run of approximately 53 yards helped the Pam Pack start to pull away with a 27-13 lead. North Lenoir’s field didn’t have hash marks painted in between the standard 5-yard intervals, so most of the statistics reported in this article were approximated based on the ball’s position.

North Lenoir’s ensuing drive stalled, and the Hawks punted from their own 46-yard line. Washington muffed the return, and North Lenoir recovered the loose ball. Washington’s coaches argued that the Pam Pack didn’t touch the ball and therefore didn’t muff the return.

Washington’s defense held strong and eventually stopped North Lenoir on a fourth-and-3 run at Washington’s 32-yard line, forcing a turnover on downs.  That set the stage for Moore’s 68-yard touchdown run that gave Washington a 34-13 lead with less than a minute left in the third quarter.

North Lenoir responded with its first and only score of the second half, although it took more than half of the fourth quarter for the Hawks to finish off a 65-yard drive with a short touchdown run by Jaden Kilpatrick. Following an unsuccessful 2-point conversion run by the Hawks, Washington held a 34-19 lead with just over five minutes left in the game.

Washington scored on its first drive of the game, jumping ahead 7-0 on a 20-yard pass from Pippin to Gerard.

North Lenoir responded with an 8-yard touchdown run by a player whose jersey number wasn’t listed on the team’s MaxPreps roster.

Washington turned the ball over on downs on the next drive. Facing a fourth-and-5 from North Lenoir’s 38-yard line, Pippin scrambled but was stopped short at the 35.

The Pam Pack defense responded by forcing a turnover on downs. That gave Washington the ball back with four minutes until halftime — which was enough time for Moore to score on a 21-yard run. Washington’s 2-point conversion attempt failed.

Owens liked how his team executed its running game.

“If you’re playing an even front against us, we’ve got three linemen pulling,” Owens said. “That’s our super counter. We bring back all of those veteran players up front, and then we bring back the two best tailbacks in the east, in my opinion. I feel good about what we have. I’m proud of everybody.”

Penalties hampered the Pam Pack all night, and those mistakes will be addressed in practice.