Community helps out after hurricane 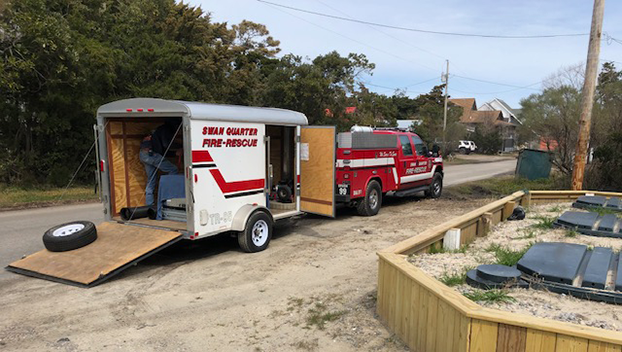 With the recent delivery of a new upright Frigidaire freezer to Ocracoke, the Swan Quarter Volunteer Fire Department (SQVFD) closed out a mission that they embarked on back in September 2019 following Hurricane Dorian.

When the hurricane swept over Hyde County, the island of Ocracoke with up to a 7-foot storm surge on September 6, 2019, it left behind over 700 damaged structures, including over 400 primary residences. Almost every vehicle on the island was a total loss.

While almost everyone on the island felt the effects of the storm, the SQVFD received word that the Hispanic population – about 20% of Ocracoke’s year-round population of 1,000 – had been especially hard-hit because many lived in the older homes on the island that sat lower to the ground and therefore received the most damage.

Additionally, since the majority of Ocracoke’s Hispanic families work in the service industry they lost their livelihoods when the tourism season ended abruptly and the island was closed to all visitors for many months.

The first requests the SQVFD filled were for Spanish/Mexican food items that were not available on the island. Thus began the Ocracoke Hispanic Outreach (OHO) project. The Beaufort County Chapter of the NAACP assisted in acquiring culturally appropriate food, meat, and fresh produce items, but as the weeks turned into months, it was obvious that there were also many more unmet needs.

The SQVFD was fortunate to partner with the Disaster Relief Recovery Preparedness Commission of the Episcopal Diocese of East Carolina and the Episcopal Relief & Development headquartered in New York, N.Y. Grants from those organizations helped fund immediate needs such as food, rent, medical and utility payments. Eventually they also provided funds for large appliances and bedding. Funds were administered by St. James Episcopal Church in Belhaven.

As word got out, many of the SQVFD’s supporters made cash donations to the project and also provided clothing, household items, food, furniture, and other essential articles. Other members of the community served on the OHO committee, assisted as translators and helped to transport items to the island.

Getting all of these donated items to the island was a logistical nightmare. Though there was no visitor traffic, every one of the N.C. Ferry System boats were jam-packed with essential workers, equipment, and supplies. Somehow it all worked out, and now that the last appliance has been delivered, a relieved SQVFD Fire Chief Jeffrey Stotesberry stated: “This is a great example of neighbors helping neighbors. We are glad we were asked to be involved and we want to thank everyone who helped us make this a successful venture!”