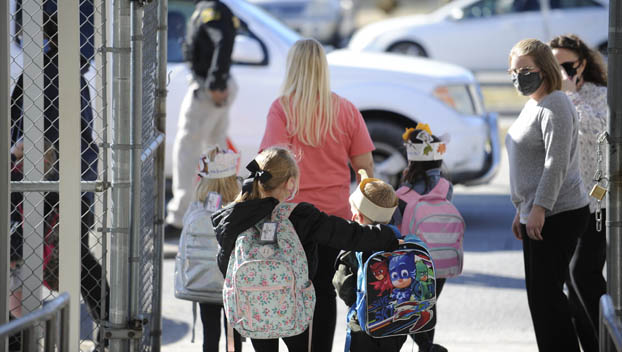 The agreement, announced in a rare bipartisan news conference by some the state’s most powerful leaders, comes nearly two weeks after Cooper vetoed a GOP bill that would have mandated all districts reopen with at least partial in-person instruction.

Cooper complained that measure would have kept state and local officials from pulling back classroom teaching should there be unexpected coronavirus outbreaks. Republicans countered that students were suffering academic and behavioral problems in districts that had yet to untether themselves from virtual-only learning, which started in March 2020.

More school districts are returning now to some form of in-person instruction as case counts fall and teachers receive vaccinations, but lawmakers said a requirement was necessary.

Cooper, who had strongly urged districts in recent weeks to return students to the classrooms, said Wednesday that the agreement will “get all students in schools safely and surely.”

The new bill, largely negotiated by Cooper and Senate Republicans and expected to receive its first votes later Wednesday, would require all K-5 schools hold classes five days a week with no need for physical social distancing, according to elected leaders.

Districts would have two options for middle and high schools. They can either adhere to having students separated by at least 6 feet (2 meters), limiting in-person instruction to just a couple days of week due to space constrictions, or move to five days a week like elementary schools.

State school guidance already allows middle and high schools to operate under the 6-foot (2-meter) requirement, called “Plan B.” Districts would have to notify state officials when grades 6-12 move to daily instruction without physical distancing. And the governor could scale back in-person instruction in specific districts if deemed necessary.

Senate leader Phil Berger, a Rockingham County Republican, said the legislation was a “fair compromise that returns many students to full-time, in-person instruction.”

Cooper and Berger said separately Tuesday that talks were happening about finding a resolution to the vetoed bill. The Senate fell just one vote short last week of the chamber overriding Cooper’s veto. The GOP was prepared to apply pressure on a Democratic senator who had co-sponsored the vetoed legislation but who was absent for the override vote.

The governor and lawmakers from both parties praised the willingness of the two sides to negotiate an agreement. The resolution follows four years of veto fights between Cooper and GOP lawmakers on a host of topics.

“The results of those efforts are why we have a truly bipartisan bill before you today that everyone can support,” said Senate Minority Leader Dan Blue, a Wake County Democrat. In a symbol of the compromise, Cooper and legislative leaders held an outdoor news conference on the walking mall separating the old Capitol, where Cooper keeps his office, and the Legislative Building.