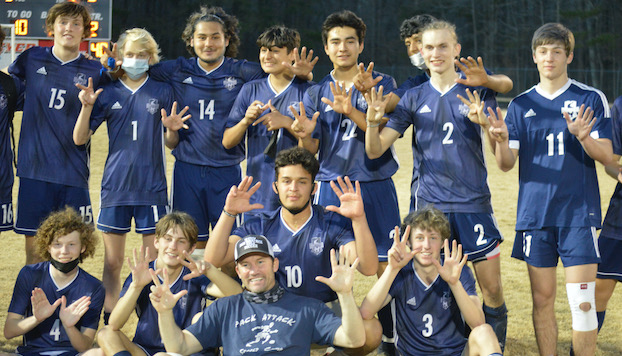 Senior Seth Davis’ goal midway through the first half gave Washington High School a lead they never relinquished on the way to a 5-3 victory over Green Central on a sun-drenched Thursday afternoon at Wagner Stadium.

The Pam Pack finished undefeated at 11-0 for their eighth straight conference championship.

“This was a great win for our seniors, because it gives them a league title every year they’ve been here, which is quite an achievement,” Kozuch said.

They have given us great leadership all year, so it’s a wonderful way for them to go out.”

Senior Brandon Cox scored on a shot from 20 yards out on the right side to put WHS ahead 2-0 at halftime, then senior Luis Ramirez converted a penalty kick within the first minute of the second half for a 3-0 advantage.

“That one gave us some breathing room,” Kozuch said. “I thought we were in good shape at halftime, but it was nice to see that third one early in the second half. We played smarter than we did at their place earlier in the year (a 3-2 win) and we let the game come to us. Our defense and goaltending were outstanding as they have been all season.”

WHS made it 5-0 before the Rams scored three late goals.

The Pack heads to the state tournament next week, seemingly in line for at least one home match after they only played two during the regular season because of wet field conditions.

“It will be nice to be home for at least one match,” Kozuch said. “Both of Greene Central’s losses are to us, so we proved to ourselves that we can beat a quality opponent. That gives us some confidence going into the state playoffs.”