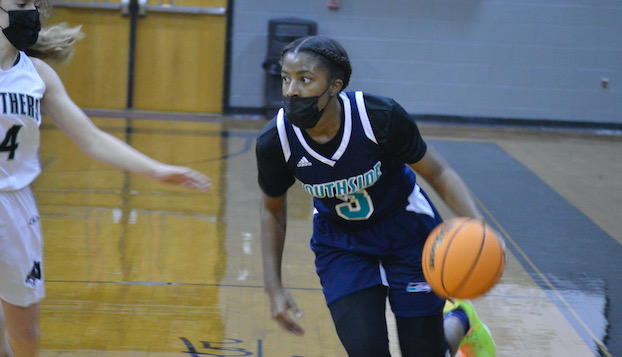 Southside sophomore Ka’nyah O’Neal is the Coastal Plains 1A player of the year after leading the Seahawks to the third round of the state playoffs. (Steve Barnes|The Daily News)

Second year Washington High School coach David Allewalt is the Eastern Carolina 2A Conference coach of the year after the Pam Pack captured their first league title in 30 years. Seniors Omarion Blount, Jamauri Bryant and Jeremee Bryant along with junior Terry Moore were named to the All-Conference team.

All four scored in double figures and helped the Pack to a 10-3 record and a trip to the third round of the 2A state playoffs in the COVID-19 shortened and delayed 2021 season.

“The job is a lot easier when you are surrounded by fine young men,” Allewalt said. “I send out a big thank you to all my players and congratulate those who earned post-season honors. They deserved it after all they went through during the pandemic and I am very grateful to be recognized by my peers.”

Junior Marchina Warren was the Washington representative on the All-Conference girls team.

Southside sophomore Ka’nyah O’Neal was voted the girls player of the year in the 1A Coastal Plains conference. She averaged 26 points, 15 rebounds and four steals in leading the Seahawks to the third round of the 1A playoffs.

‘It just shows that hard work pays off,” Southside coach Milton Ruffin said. “She has natural ability and she’s put in the time to get even better. Everything about her game improved this season and the sky is the limit for her as far as potential goes.”

Northside’s Michelle Leathers was voted Coastal Plains Conference coach of the year after leading the Panthers to the East Regional final.

“All three of them did whatever it took to win on any given night,” Leathers said. “They were very unselfish and played very well together. That’s why we had the success we had.”

Junior Kiefer Boyd was the Panthers representative on the boys squad. He led the team in scoring at 10.7 points per game.

Southside placed senior Hundley Stallings and junior Kendjay Coffield on the All-Conference team. Stallings led the Seahawks with 19 points and 8.6 rebounds per game, while Coffield was second at 15.3.

The Southside boys qualified for the 1A state tournament as a wild-card but couldn’t participate because of COVID-19 contact tracing concerns.