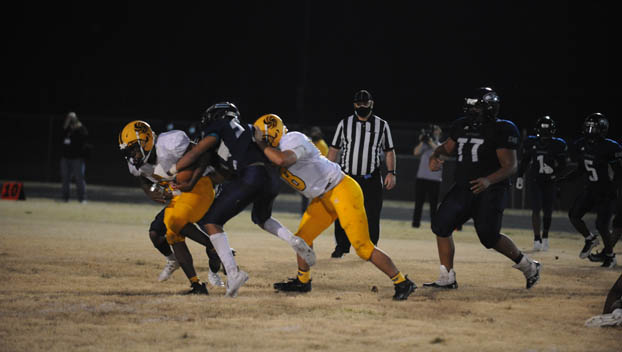 In a sloppy game filled with turnovers, penalties and miscommunications by both teams, Pamlico County pulled away in the second half and claimed a 34-14 victory over Southside on Friday night.

A 30-yard touchdown pass midway through the third quarter gave Pamlico County (1-1) its first lead of the night, 14-8. On Southside’s ensuing drive, with the Seahawks (0-2) setting up at the 50-yard line, two deep passes by quarterback Hundley Stallings narrowly fell incomplete — one intended for Isaiah Grimes, and the other intended for Kenjray Coffield.

Those misses led to a Southside punt. Around that time, coaches on Southside’s sideline were reminding the Seahawks that they were one turnover away from regaining momentum. Shortly after that, Southside’s Jaqwan Cobb recovered a Pamlico County fumble at the 50. But the Seahawks couldn’t capitalize, as Pamlico County’s defensive front stalled Southside’s running game.

Southside advanced deep into Hurricanes territory near the end of the third quarter, and Coffield finished the drive with a 5-yard touchdown run on the first play of the fourth quarter. The Hurricanes held a 22-14 lead after Southside’s unsuccessful 2-point conversion attempt.

Pamlico County responded with a 45-yard touchdown pass from Isaiah Godette to Tutt, followed by a failed 2-point attempt. The Hurricanes held a 28-14 lead with just under 10 minutes left in the game.

A fourth-down sack caused the Seahawks to turn the ball over on downs on their next possession. Pamlico County then scored the game’s final touchdown on a 36-yard pass from Godette to Michael Pool.

Both teams had turnovers on their first drives of the game. Pamlico County lost a fumble, and Southside turned the ball over on downs. The first score of the game came at the 7:38 mark of the second quarter, when Southside’s Davion Carter scored on a 6-yard run. Stallings found the end zone for the 2-point conversion.

Tutt made it 8-all with a 21-yard touchdown run and a 2-point conversion run on the next drive.