Northside linemen control both sides of the ball 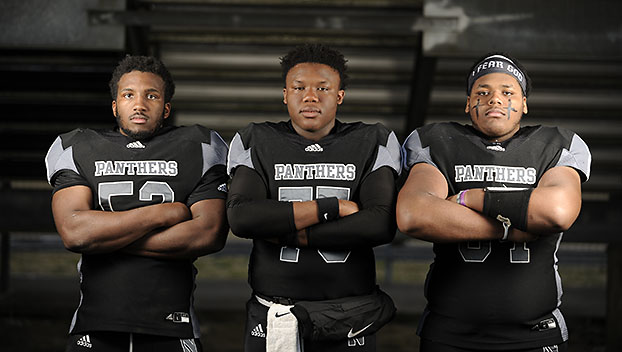 Incentives are an open-ended concept that can take many forms.

Northside’s senior linemen have a long and short-term perspective.

The Panthers are off to a 3-0 start heading into Friday’s showdown at perennial powerhouse Tarboro and their dominance along the offensive and defensive fronts are the main reason for their success.

That’s where the short-term incentive enters the picture.

“The coaches feed us after practice on Monday after a shutout,” 6’3, 310 lb. guard and defensive tackle Zion Wilson said. “That grabbed our attention quick, and the food gets better every time. We started with burgers from McDonalds, this time it’s pizza from Frank’s in Washington and I vote for something from Ruth’s Chris if we shut out Tarboro.”

Wilson, Fred Taylor, A.K. O’Neal and Nick Baker have been line mates since their freshman year on the JV, while tight end Jacob Tyson transferred from Washington High School for this season.

Together the group has opened holes for senior tailback James Gorham to scamper for close to 500 yards so far this season and average almost 10 yards every time he carries the ball.

They’ve also combined to close holes quickly along the defensive front as Taylor (6’2, 230 lb.) and Wilson lead the team in tackles.

“We’ve waited a long time to get on the field and we know COVID-19 could shut us down any day,” Taylor said. “We know we only get four more games to wear this uniform and we have to go hard every play if we want more (in the playoffs).”

The Panthers walked off the field with a bitter taste in their mouths after their post-season run ended with a 34-21 second-round loss at Northampton County.

That’s where the long term incentive comes in.

“We didn’t connect as a team in that game,” Baker said. “We didn’t communicate with each other and everybody tried to do their own thing. We said right then as we were coming off the field that it wasn’t going to happen again our senior year. It hasn’t so far.”

The friends and teammates started working out back in the summer for a season with an uncertain start date. As fall came and went, the preparation increased when word came there would be a shortened spring season.

“There’s a lot of pent up aggression and definitely a sense of urgency,” said O’Neal, whose given names of Amarian Kyseem was shortened to A.K. at a very young age.   “The season goes by fast, and we want to let it out on the other team every game.”

Offensively, the Panthers have run the ball 107 times and thrown seven passes, while allowing under 200 yards a game defensively.

“I said at the beginning that we would hang our hats on our offensive and defensive lines,” Northside coach Keith Boyd said. “They are the key to our rushing attack and the ones in charge of stopping the opponent from running.

The defensive line has done a great job so far and we are starting to see that push from them on offense. They do the dirty work to make the team successful. I will miss coaching this bunch.”