Pam Pack softball returns with hope for a complete season 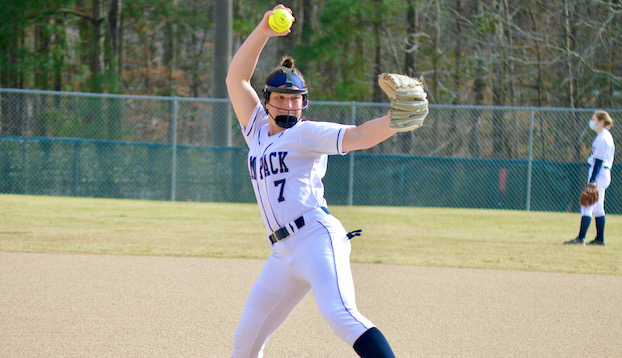 It was just about this time last spring when the sports world came to a screeching halt because of COIV-19.

The Washington High School softball season fell victim as well, one that a senior-laden team was highly anticipating after back-to-back deep runs in the state tournament.

It was not to be, however, as the pandemic ended careers prematurely all over the country.

This year’s group is much younger, but not inexperienced according to first-year head coach Brad Horton.

“We only have two girls who have varsity level experience, but they’ve all played a lot of softball,” Horton explained. “Dallas Tucker (WHS assistant coach) and I have coached our county travel team for 10 years now, and most of our core players have been with us before. We are strong up the middle and hit the ball pretty well, so I’m excited about the season.”

The Pam Pack rolled over Kinston, 18-0, in three innings in Monday’s season-opener. The Vikings starting pitcher didn’t make the trip, which compounded matters for the visitors.

Senior right-hander Savanna Craft struck out all six batters she faced, and sophomore reliever Erin Everett fanned the side in the third inning for a perfect game.

Sophomore catcher Katherine Pollock hit a home run in her first at-bat of the new season and added a double in her second. Junior Olivia Paszt went 2-2 with a triple and 10 other Pack players had hits.

“Savanna will be a key for us on the mound,” Horton said. “She throws in the low 60s with a rise, drop, curve and change-up. She’ll be our starter, but we have others to come in behind her. Hitters usually adjust in the third at-bat against the same pitcher, so Erin and a couple more will see time in the circle.”

Horton took over for veteran Doug Whitehead, who retired after 15 seasons. He assisted Whitehead for the past five, so he knows the tradition the program has.

“Coach Whitehead did a great job building what we have,” Horton said. “We have 18 players on the roster this year, but don’t have a JV program. Since COVID shortened our season, only two opponents have JV teams, so we decided everyone would benefit from practicing with varsity and earning playing time as we go.”

“We have good speed, play solid defense and make good contact at the plate,” Horton said. “Our depth and versatility should help us also. We work on hitting and fielding fundamentals every day in practice, so hopefully that will translate into a successful season.”