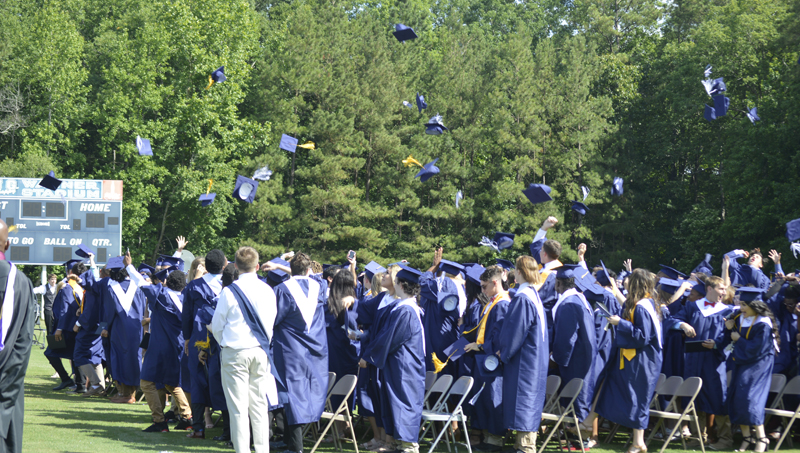 Principals are in the process of planning this year's graduation ceremonies. (Matt Debnam / Daily News, File)

High school seniors in Beaufort County will have proms and graduation ceremonies this year. How those events will look amid the COVID-19 pandemic is up to their principals.

Superintendent Matthew Cheeseman is giving high school principals the green light to plan proms — or similar alternatives — that allow for COVID-19 protocols to be followed.

“In my vision it’s open air activity or large open gym spacing, still following capacity rules,” Cheeseman told the school board Tuesday. No vote was taken, but Cheeseman asked for and received the board’s approval before telling the principals to start planning.

“We’re looking at the protocols that would have to be in place in terms of the prom and dancing,” Cheeseman said. “Maybe not slow dancing, but still having some type of opportunity. And if our high schools want to do something a little bit different in lieu of the actual prom as what we all know it to be, then I would support something like that too.”

Cheeseman noted that this year’s high school senior class missed out on prom last year because of the pandemic.

“It’s my professional belief that they deserve it,” Cheeseman said. “And as adults we need to try to do something for them.”

Cheeseman is asking principals to take a similarly creative approach to planning their respective graduation ceremonies. All of those ceremonies will be held outdoors this year, with the exception of Beaufort County Early High School, which will conduct its ceremony in Washington High’s auditorium.

“I personally trust our principals to do what they feel like is safe for their students,” Chairwoman Carolyn Walker said. “And you might have to be a little more creative, but then again by the time this takes place — especially your promotions, graduations — we may be in a very different place statewide as far as what we’re allowed to do.”

Cheeseman said the ceremonies were spread out to give some principals a chance to see their own children graduate.