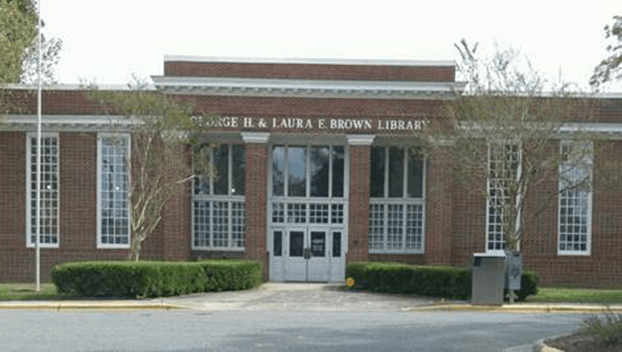 “On March 17, 1911, that was the beginning of public library service for the city of Washington. It was a direct response to a call from the committee of the chamber of commerce on libraries and public education,” said Sandra Silvey, library director for the George H. and Laura E. Brown Library.

After service began, the library was housed above the Brown Opera House before being moved to the second floor of a stationary and book store owned by the first official librarian of Washington, Elizabeth Betts. It then traveled to the Pamlico Chemical Company in 1922.

The library acquired its permanent location at 122 Van Norden Street from Laura E. Brown. Upon her death, Brown donated her home to the library under the stipulation that it be renamed from the Washington Public Library to the George H. and Laura E. Brown Library.

The library still sits where the Brown home once did. The current building the library occupies was built in 1954. In 1989, the City of Washington took over the library and established it as a department within the city. The building underwent renovations in 1994.

To celebrate the library’s anniversary, there is a drive through event in the parking lot with gift bags available to the first 110 families to come through. In addition to this in person event, the library will live stream an event hosted by Stephen Farrell and Terry Rollins at 11:00 a.m. on the library’s Facebook page.

While these events will be held virtually and socially distanced, Silvey is excited for the library to reopen in the future.

“The city is working on reopening plans now. The staff are all getting their vaccinations now. We’ve all had our first shot and our second shots are coming up later this month and we’re all working on our plans to move forward,” Silvey said. “We don’t have anything set yet but we are starting to plan for it.”

For updates on the George H. and Laura E. Brown Library, visit the library website or Facebook page.