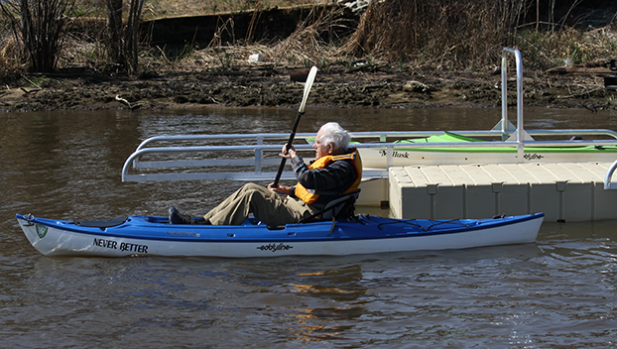 NEVER BETTER: Harlan McKendrick started kayaking at the age of 85 and was able to experience the launch point before the rest of the public. (Submitted by Vail Stewart Rumley) 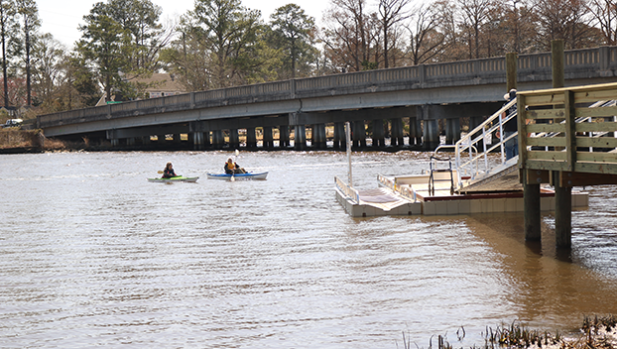 PADDLING ALONG: McKendrick and his daughter, Linda, explored the area around the launch point on Runyon Creek. (Chelsea Hofmann / Washington Daily News)

The kayak launch on Runyon Creek is open to the public following a successful partnership between the City of Washington and Sound Rivers.

“The city and Sound Rivers have come together and it was a great partnership for both entities. It’s an awesome asset for the city and another will be coming shortly at Mason’s Landing this summer,” said Kristi Roberson, director of Parks and Recreation for the City of Washington.

Sound Rivers and the City of Washington have been working on the project for more than five years. This launch is one of three planned. The other two launches will be installed at Mason’s Landing in Washington and Port Terminal in Greenville.

“This has come together from community interest wanting to increase public access and safe kayak access for individuals with disabilities and people of all abilities. We’ve been working toward a vision and we finally have a beautiful finished product,” Roberson said.

The launch at Runyon Creek features two launch points. One features the EZ Launch system, which allows users with disabilities to easily get in and out of their kayak. 101-year-old Harlan McKendrick, demonstrated how the EZ Launch system works as he entered his kayak to become the first official kayaker to use the new launch point. McKendrick is a frequent kayaker who picked up the hobby at 85 years old. He often paddles around the Pamlico with his daughter, Linda.

“This project is exciting and important to our city because providing public access to water is very important and huge to our area. Come out, launch a kayak, and enjoy our beautiful river,” Mayor Donald Sadler said. He was given the honors of cutting the ribbon to officially open the launch.

“This project is part of the wider Tar-Pamlico River Trail, hoping to promote the region’s natural environment and recognize the great economic asset we have in our own backyards,” Roberson said.

The newly opened kayak launch is located next to the existing public access boat ramp on Runyon Creek at the end of East Main Street. On site parking is available to those utilizing the launch.