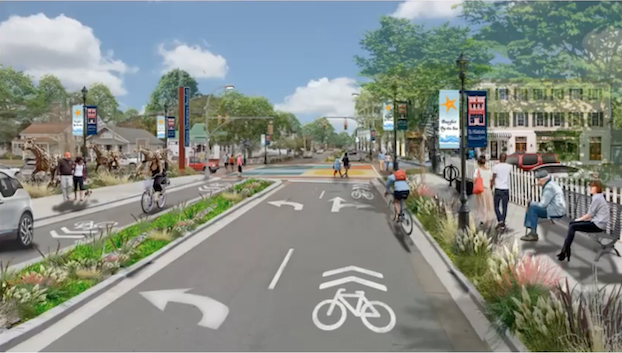 The next step in the plan to improve 15th Street in Washington comes Tuesday evening with the first of three 90 minute virtual concept design refinement sessions, also known as pin-ups.

“If we were doing this in-person, we would invite people to a location along 15th Street and literally pin our designs to the wall, so they could examine them,” Stantec principal engineer and project manager Mike Rutkowski said. “Since we are meeting virtually, folks will be able to see our design options on their screen and offer feedback.”

The City of Washington hired Stantec back in the fall to revamp the corridor between U.S. 17/Carolina Avenue and Brown Street that has been a hot topic for years. State crash data from the past three years revealed the road to be among the most dangerous in the state and a citizen survey showed that improving safety was the top priority.

The North Carolina Department of Transportation owns the road and will pay for its’ reconstruction, so they have final approval before work can start.

DOT presented its own plan four years ago to a previous City Council, who voted it down after vocal opposition from neighbors and business owners along the street.

“Choices were made for us the last time and nobody asked us what we thought,” Councilwoman Betsy Kane, who was not part of the previous council, said. “We’ve tried to provide a transparent process that encourages public involvement and feedback every step of the way and next week is the latest opportunity to have your voice heard and be part of the process. We want to have a community conversation.”

Rutkowski said his team of engineers, landscape architects, urban planners and project designers will meet with several focus groups made up of various stakeholders during the day next week, then incorporate their ideas into design options for the night sessions.

“What we end up with on Thursday should look different than what we started with on Tuesday,” Rutkowski said. “There are several options that we can pursue to make the road safer and more pedestrian and bicycle-friendly. We will never reach 100% percent consensus, but we want the people to understand how we reach our final decisions. There will be tradeoffs in this project, just like any other, but based on our experience, we will emerge with a design that will work.”

The meetings are from 5-6:30 p.m. Tuesday, Wednesday and Thursday. Go to washingtonnc.gov/residents/15thStreetProject to access a link to join.

The kayak launch on Runyon Creek is open to the public following a successful partnership between the City of Washington... read more