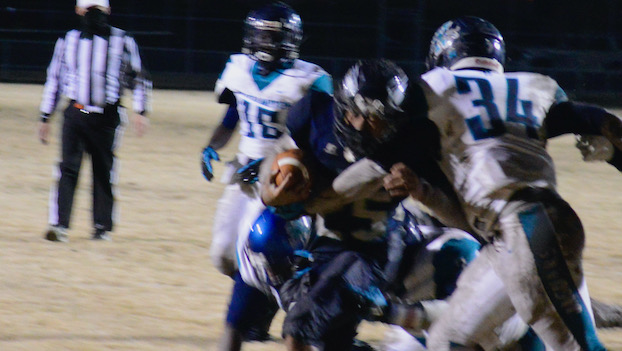 Southside High School rallied for a 28-22 home victory over Northampton County on a cold Friday night in Beaufort County.

Junior Kenjray Coffield staked the Seahawks (1-2) to 20-8 lead early in the third quarter on scoring runs of 55, six and five yards after back to back fumble recoveries.

The Jaguars (1-1) roared back for a pair of second half touchdowns to take a 22-20 lead on the first play of the fourth quarter.

The winning drive started on the Seahawk’s own 48 yard line with six minutes to play. Coffield’s 32 yard run to the 20 and Tequon Moore’s 15 yard scamper set up senior Davion Carter’s five yard burst up the middle for the go-ahead touchdown, with four minutes left.

Aeron Wright’s sack on fourth down with 1:30 to play iced Southside’s first win.

“We went back to basics all week after our loss to Pamlico last Friday,” Southside coach Jeff Carrow said. “Our defense has played well all year and they played some big time ball tonight with stops when we needed them. We stuck together, kept fighting and came out with the win.”

Carter led the rushing attack with 108 yards on 16 carries, while Coffield had 101 on eight carries. Southside attempted just one pass all night while Northampton tried four. Moore was the Seahawks leading tackler with 12.5, including nine solo stops and one for a loss.

Southside is finished with the home portion of the COVID-19 abbreviated six-game regular season and plays at Tarboro Friday.

The Seahawks recognized seven senior players, cheerleaders, student trainers and band members along with their families in a pre-game ceremony.