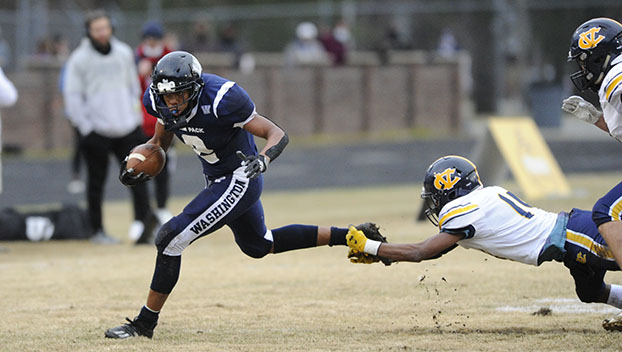 Washington High School let victory slip away in their home opener against D.H. Conley Saturday night at Wagner Stadium. Check out photos from the game HERE.

Two fumbles and two failures to convert on fourth down inside the 20 yard line cost the Pam Pack (2-1) in a 14-7 defeat.

The fumbles came on back to back drives in the first half after the Pack trailed 7-0.

Washington had a chance to tie on the last play of the half but dropped a pass in the endzone.

“If we convert in the red zone, we win by two touchdowns,” WHS coach Perry Owens said. “Our defense was out of sight tonight. Conley is a 3A playoff team every year and we did a great job against them defensively. We made stops when we had to, but we just couldn’t convert when we needed to.”

Washington’s only scoring drive went 65 yards early in the third quarter after Conley went three and out.

5’5 235 lb. senior fullback Kris Hill sparked the Pack with consecutive runs up the middle on third down to keep the drive alive, then found the endzone on a one yard plunge to tie the score at 7 with 4:47 left in the third quarter.

Conley (2-2) answered with the eventual game-winning drive covering 58 yards for a 14-7 lead.

The Pam Pack was poised to answer after senior Jaden Hambric’s 39 yard run to the Conley 10. After a Viking penalty gave them the ball at the five, WHS lost yardage on running plays and their fourth down pass fell incomplete.

The defense made one final stand and the Pack took over on their own 27 with 3:27 left.

Junior quarterback Hayes Pippin found senior Hayden Anderson for 15 yards, junior Terry Moore ran 12 yards to the 50, but the drive stalled, and Conley stopped Pippin on fourth down to run out the clock.

“You can’t make that many mistakes against a good team and win,” Owens said. “This was a playoff-type atmosphere, and this game will help us down the road. We have to execute when the pressure is on.”

Washington is home Friday against South Lenoir at 6:30. The home contest against Kinston has been rescheduled for Monday, April 5, also at 6:30.