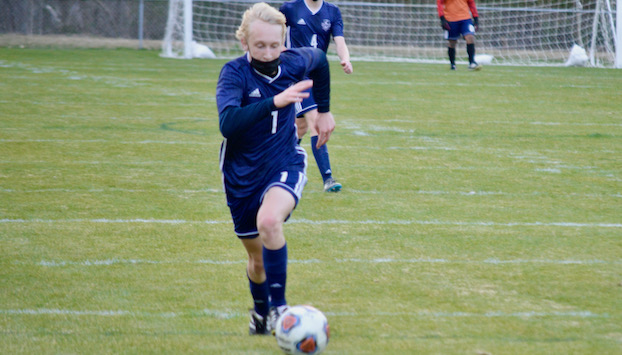 The Pam Pack boys soccer teams state tournament run ended with a 3-1 third round loss to Richlands on a windy Monday night at Riverside High School in Williamston.

Washington (13-1) was the host team but couldn’t play at home because of drainage issues at their home field.

Richlands (13-2-1) scored first on a penalty kick five minutes into the match, putting the Pack behind for the first time in post-season play. They had several shots on goal behind the Bulldogs defense but couldn’t convert until sophomore Luke Brown scored from the left side after a nifty cross field pass from senior Brandon Cox to tie the score 1-1 with 30 minutes left. It stayed that way the rest of the half as both goalkeepers made multiple saves.

“Soccer is a game of opportunity and we didn’t capitalize when we had a chance to put them away in the first half,” WHS coach Jim Kozuch said.

Richlands struck for the eventual winning goal midway through the second half, then added the third one at the 18 minute mark.

“I was proud that we kept playing to the end,” Kozuch said. “Richlands was a quality opponent, but our mistakes gave them two goals on free kicks. We got away from our style of moving the ball around by passing. You can’t play kickball and expect to win in the third round of the state playoffs.”