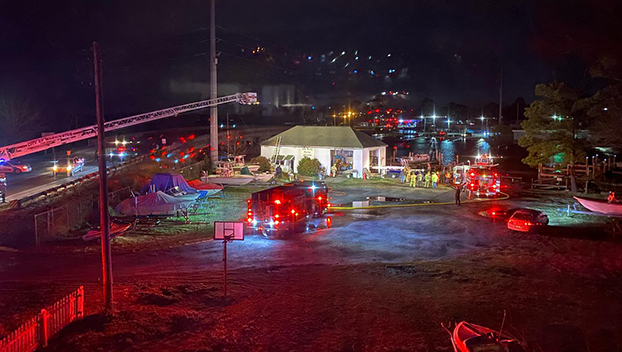 Officials with the Washington Fire Department believe an electrical issue was likely the cause of a fire that occurred in Washington Park early Sunday night.

“After the investigation last night, our incident commander did determine that he did think it was electrical in nature. He couldn’t exactly put his finger on the cause of the fire but he’s very sure it was electrical up in the attic,” said Chief R.M. Flowers with the Washington Fire Department.

WFD responded to the call at 7:40 p.m. for a fire at the Boat Works Marina on River Road in Washington Park.

“The city of Washington and Bunyan Fire Department responded for mutual aid and when our first engine got on scene, they did note heavy smoke coming from the roof,” Flowers said.

Chief Flowers said the crews were able to put out the fire quickly, which had started in the attic of the building. The damage done to the business is minimal and no individuals were inside the building during the fire.

“They stopped the fire really quick before it got ahead of them,” Flowers said. “There was one boat inside the shop and our crews were able to get that out before any damage was done to it.”

Boat Works Marina is located at the mouth of Runyon Creek and offers wet slips, trailer storage, private ramp privileges and water and electrical services. A lounge area is also available for customers and is located in the building where the fire took place.

“I really can’t say enough wonderful things about the firefighters. They really took care of things in a super fast way and they were on site in a flash. We sustained very little damage and we’re really lucky,” said Lary Hodgkins, owner of Boat Works Marina.