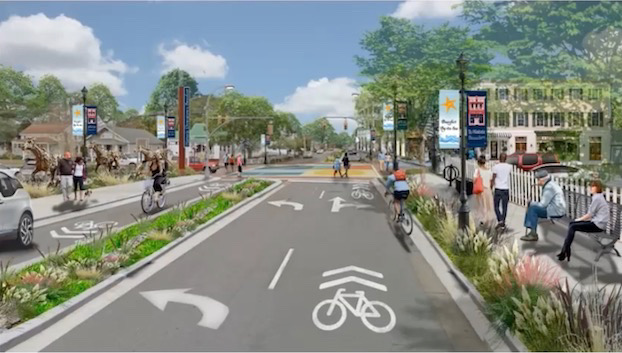 This rendering represents one of several potential redesign options for 15th Street in Washington.

15th Street in Washington will look decidedly different if the city council ultimately approves the option Stantec Engineering presented Tuesday evening during the first of a three-day virtual design workshop.

The city paid Stantec $75,000 to come up with an acceptable plan to reconfigure 1.6 miles of the unsafe corridor from U.S. 17 Business/Carolina Avenue to Brown Street. Crash data compiled by the company shows the road to be among the least safe in the state.

The North Carolina Department of Transportation owns the road and will have to approve any redesign plan since it will pay for construction.

Stantec project manager Mike Rutkowski unveiled the first option that includes shrinking the road from four lanes to three-one in each direction with dedicated left turn lanes at the major intersections.

The current right of way is 60 feet, but the actual pavement only takes up 39, leaving the remainder for a five foot path on the south side and 10 feet on the north, potentially enough for sidewalks and bicycle lanes.

“We will be bringing the curbs into where the road is now, so we would avoid taking people’s property to expand the right of way,” Rutkowski said. “There is no silver bullet, but we think we can have a safer street within the existing right of way. Right now, the inner two lanes of the current road are essentially turning lanes anyway, so this option makes the road safer by eliminating the sudden stops and lane changes that occur when a motorist is trying to turn left. We’re making it more pedestrian-friendly by adding the paths on both sides.”

Wednesday’s session will feature more design options. The virtual meeting is open to the public and can be accessed through a link on washingtonnc.gov. The meeting is from 5-6:30 p.m.