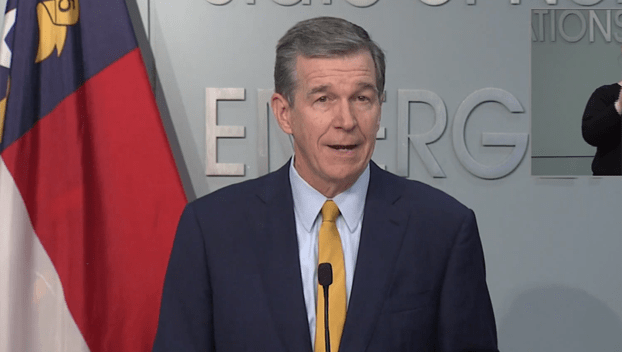 Gatherings not otherwise included in the updated executive order set to expire April 30 will increase to 50 people indoors and 100 people outdoors. The statewide mask mandate will remain in place, and the required six feet (1.8 meters) of physical distancing may not allow businesses to reopen at the capacity caps outlined.

“These are significant changes, but they can be done safely,” Cooper said at an afternoon news conference.

The announcement comes as a handful of North Carolina counties have expanded COVID-19 vaccine eligibility to all adults, regardless of age, health condition or job type, due to limited demand in their areas.

Amid the differing demand across counties, North Carolina is shifting its allocation strategy this week. Of the nearly 250,000 new first doses it’s receiving from the federal government, 97% will be distributed to local providers based on the percentage of residents in a county not yet vaccinated.

“This is a shift from previous allocations that were based on number of residents in a county,” the department said in a statement. “The updated methodology provides vaccine across the state in areas where it is most needed and helps ensure access to those that are not yet vaccinated.”

Limited demand has prompted providers in Craven, Cumberland, Greene and Rockingham counties to expand eligibility to Group 5, which covers every North Carolinian who is at least 16 years old. In four days, Cape Fear Valley Health scheduled all of its more than 1,500 appointments available to the general public.

State health officials said in a statement that “vaccine providers should not put restrictions on administering vaccinations based on North Carolina county of residence.”

North Carolina is scheduled to allow essential workers not yet vaccinated to begin getting shots on April 7. The state anticipates qualifying the general public by May 1, though Cooper suggested the timetables could come sooner as more supply enters the state.

“We are hoping that we can get earlier into the rest of Group 4 and into Group 5 even earlier,” Cooper said.

Less than one in five North Carolina adults are fully vaccinated, as of Monday, according to data collected by the state Department of Health and Human Services. More than 22% of total residents and nearly 29% of adult residents have been at least partially vaccinated.

To encourage vaccinations, Winston-Salem-based donut chain Krispy Kreme is offering a free glazed donut each day for the rest of the year to all customers who present their COVID-19 vaccination cards.

Cooper said he plans to work with Dr. Mandy Cohen, the state’s top public health official, and state lawmakers, to brainstorm possible rewards for those who get vaccinated.

“Right now, our demand exceeds supply,” Cooper said. “But when we do get to the point where we have enough shots for everybody and we’re trying to encourage people to get it, we probably do need to consider some kinds of incentives to get people to get vaccinated.”

Cooper’s easing of restrictions follows a sizable decrease in cases, deaths and hospitalizations. North Carolina has reported nine consecutive days of daily deaths in the single digits for the first time since March and April 2020. In three of the last six days, the share of COVID-19 tests coming back positive fell below the key benchmark of 5%. The state has also seen six straight days of COVID-related hospitalizations below 1,000 for the first time since September and October 2020.

Despite the improved metrics, state leaders face a growing challenge of combating vaccine hesitancy, though demand still outpaces supply in many parts of the state. Larger urban areas are seeing strong demand.

In Cumberland County, which covers Fayetteville and is where Cape Fear Valley Health opened up over 1,500 appointments to all adults, less than 15% of all residents have gotten at least one shot. This is far less than the statewide average of more than 22% of total residents being at least partially vaccinated. The other three counties qualifying all adults either exceed or are close to the state average.

“These vaccines are safe, they’re effective, and we want to make sure that everyone takes advantage of it,” Cohen said.