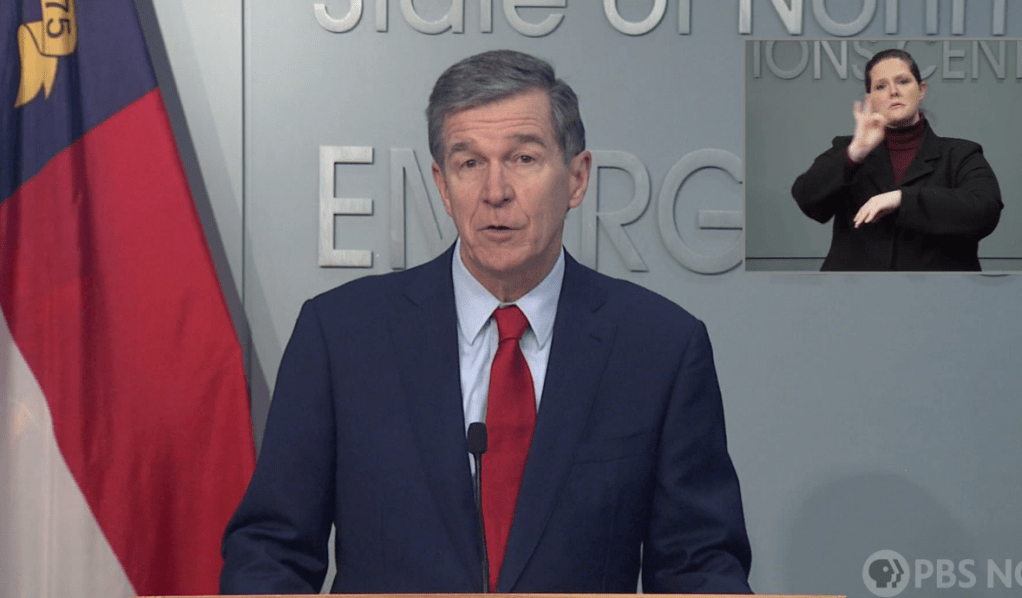 Gov. Roy Cooper speaks during a press briefing on in early February. (PBS)

RALEIGH — North Carolina Democratic Gov. Roy Cooper on Wednesday proposed a spending and borrowing spree by state government that he said is critical to fulfilling education, health care and infrastructure demands that were evident before the pandemic but have been exacerbated since.

“This is the time to find opportunity in crisis,” Cooper said at a virtual news conference to unveil the plan, which would spend $27.3 billion next year alone. “With the right priorities, we’ll not only beat this pandemic, but build lasting success for North Carolina.”

The recently reelected governor will have to win over Republicans who still control the legislature and often don’t see eye-to-eye with him on spending and tax priorities. The General Assembly will consider his requests as House and Senate Republicans fashion a budget bill and put in on Cooper’s desk. The new fiscal year begins July 1.

The governor and Republican leaders have expressed guarded optimism that they’ll work out a budget bill that Cooper can sign. Two years ago, a conventional budget was never implemented because of an impasse between the two branches that centered on Cooper’s resolve for Medicaid expansion, something that he pitched again on Wednesday. But Republicans still appear entrenched in opposing expansion.

“Everything is up for negotiation,” Cooper said.

Cooper’s package, which covers expenditures and taxes through mid-2023, would include large raises for existing public school teachers — 10% on average over two years — school support staff (7.5%) and University of North Carolina and community college system employees (7.5%).

Higher education workers and K-12 support staff have received no permanent state-funded raises the past two years, and teachers only received experience-based increases that averaged 1.2%. Cooper’s also wants to give $2,000 bonuses this spring for all educators and support staff in addition to $1,000 bonuses in each of the next two fiscal years. Rank-and-file state employees also would get the $1,000 bonuses on top of a 5% permanent pay increase.

Cooper says he’s committed to public education spending improvements in order to comply with longstanding school funding litigation. But the budget did not propose a specific dollar amount. Cooper’s administration presented  a plan to a judge last week that would spend at least $5.6 billion more for education through 2028. Pay raises, funding for at-risk students and early childhood education — all elements in the so-called “Leandro” plan — are included in the budget.

Cooper separately pitched a $4.7 billion bond referendum this fall for public school and higher education construction and for government buildings, including the new East Carolina University medical school. Cooper has been able to ally with House Republicans on issuing new debt. Senate Republicans have preferred paying for projects with cash. There’s another $1.1 billion in cash earmarked for construction.

Cooper wants to reinstate the state’s earned income tax credit, which was repealed by Republicans nearly a decade ago. He also proposed a child and dependent care credit, at a combined cost of $366 million next year. The EITC alone would help 850,000 low-income families.

Republicans have taken a different approach to income taxes since taking over the legislature in 2011 by scaling back special carve-outs, reducing income tax rates and substantially raising the amount of income that isn’t taxed at all. Senate Republicans, who will draft the first legislative budget and expect to send it to the House by early May, filed a standalone bill Tuesday to reduce the individual income rate and increase standard deductions.

Sen. Brent Jackson, a Sampson County Republican and a chief budget-writer, said in a news release he was worried about the “very high spending growth and billions in borrowing” that Cooper proposed: “We don’t want to return to an era of rollercoaster-style budgets with huge spikes in the boom years followed by huge cuts in the lean years.”

House Speaker Tim Moore offered a semi-positive take, telling reporters that while Cooper’s propsal spends too much, he was more bullish that Cooper wouldn’t need a veto stamp on the budget: “An impasse is good for no one.”

Cooper called his proposal as “a fiscally responsible path forward,” given the state’s revenue picture. There is nearly $5 billion in the state’s unreserved cash balance, and a recent study said the state could borrow $14.6 billion over the next 10 years without worrying about losing its prized top bond rating. The proposal would double the amount of cash in the state’s rainy-day reserve, currently at $1.1 billion.