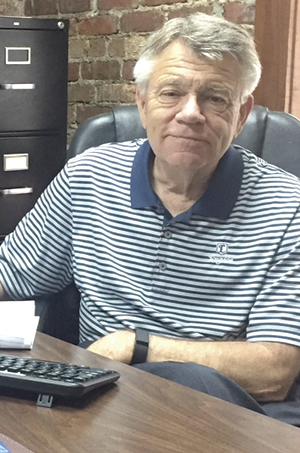 On Sunday morning, Rose Ann, Grover and I attended the Old Ford Church of Christ and it brought back memories of growing up in that Church. Now, it was not the same Church but some of the same people I grew up with were in attendance. The Church I grew up in for four years of my life was the Church across the road from where the church is now.

Some of the same people that attended that Church were present today and remain some of my best friends. Freddie Matkins, Harvey Williamson and the late, McDonald Gautier all attended church in the old building. Freddie Griffin, like me, has since moved his membership to a church in Farm Life; I’ve moved to the First Christian Church. Dottie Cutler (Rawls) was a classmate of mine in school and she was there also. Dottie was one of the smartest people in my class and finished near the top of our class. Dottie was carrying her Bible in her arms and had that patented “Dottie Smile” across her face.

The old church is the church that the Roberson family attended. The pillows in the front of the old church were named Matthew, Mark, Luke and John and built by the Smallwood family; that’s what my granddaddy Jim once told me. Mrs. Irebelle Carraway always played the piano and organ in the church, and the choir was fully dressed in their gowns and could sing “like a bird.” The pews were on both sides and made completely of oak wood and the old church had no air conditioning. Windows were opened to bring the breeze in and to cool the congregation dressed in their Sunday best. Beside the church was the preacher’s manse, so he did not have far to go for work.   Across the highway from the church was the Boy Scout Hut and a local filling station where everybody would hang out at night and talk about their crops.

The new church was once a schoolhouse that many of the locals attended. My mom went to school there and later attended Washington High School. Many of my classmates attended school there for only a year and rode the school bus from town to Old Ford. My cousin, Bunk, rode his pony and cart down the halls (so his story goes). Now, Bunk could embellish a story to make it sound good!

We used the schoolyard for our traditional fall dinner on the grounds. There just was not room in the parking lot for the congregation. For those of you who may not know what dinner on the grounds was, it was the end of revival week. The best collards and fried chicken anyone could eat! Every woman took pride in her preparation of food. Families gathered and many guests from town were invited to share in the food. We always had Dr. Pepper and Roberson Grape to drink with the food and dessert.

Yes, going to church with my sister and her husband (Grover) brought back many fond memories of that old church to me. The congregation outgrew the old church and moved to the schoolhouse many years ago. Still, the friendliest of people and a good message to boot!