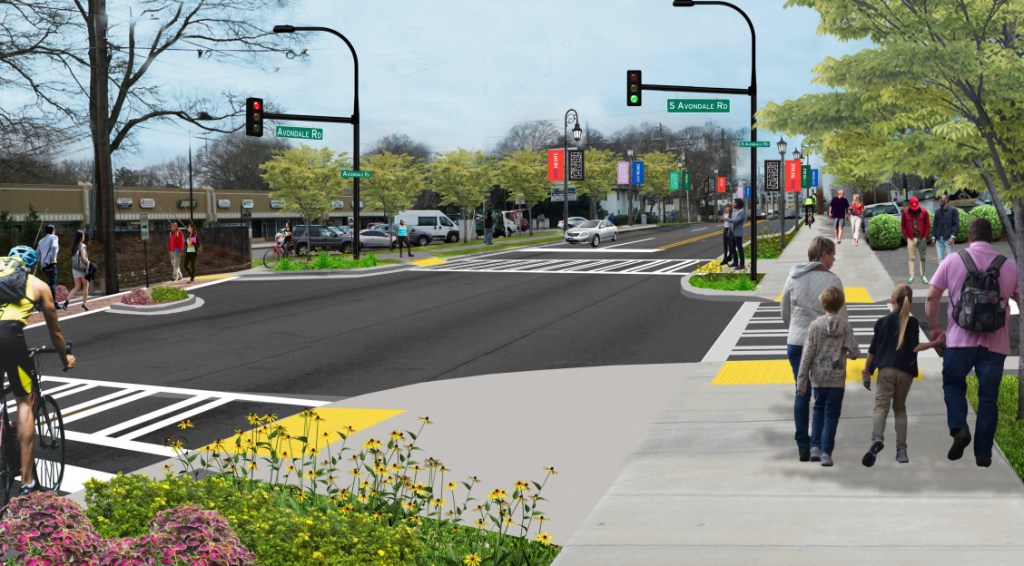 This rendering shows what 15th Street could look like after the redesign.

Washington drivers could be in for a new experience behind the wheel sometime next year-successfully navigating a roundabout on a newly redesigned 15th Street.

Stantec Engineering project manager Mike Rutkowski revealed the plan on the second evening of a three day virtual design workshop to explain progress on the 1.6 mile project that spans from U.S. 17 Business/Carolina Avenue to Brown Street.

Rutkowski showed a rendering of 15th Street with a traffic circle at the east end, where Brown, 15th and 12th Street intersect just south of Vidant Beaufort Hospital.

“You basically have a five-legged feeder road with dead man’s curve in the middle,” Rutkowski said. “Your public safety officials told me this intersection is the worst along the 15th Street corridor for speeding and running red lights. A roundabout is the best traffic calming tool we have. It also keeps traffic moving when there is no red light to wait for. We want slow and flow as opposed to stop and go.”

He explained during Tuesday’s meeting that the company hopes to redesign the road within the current 60 foot right of way, making it two lanes each way with left turn lanes and pocket medians taking up 39 feet. There will be a five foot path on the south side for a potential sidewalk and another one measuring 10 feet on the north side.

“We will move the curb and gutter into the existing road on the north side and also reroute the sewer lines under the current road,” Rutkowski said. “There is no perfect solution, but our plan will make one of the most dangerous roads in the state much safer.”

Rutkowski will explain more design options and what lies ahead in Thursday’s meeting, which runs from 5-6:30 p.m. and is open to the public. Join through a link on washingtonnc.gov.