Northside Cross-Country runners go out on their own terms 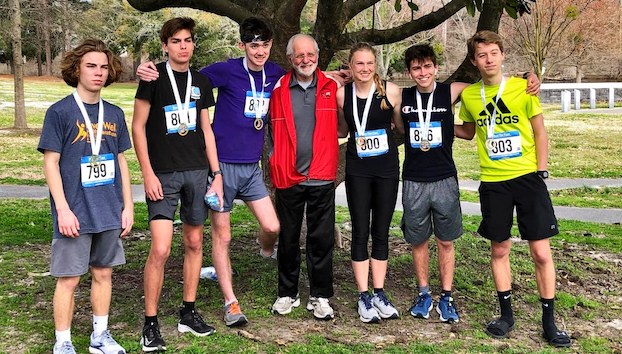 Northside senior Caroline Boyd did not envision her final cross-country season ending in a COVID-19-induced quarantine.

After it did, she decided to make sure that she and her teammates ran one last race to go out on their own terms.

Boyd qualified for the 1A state meet as an individual, while her male teammates finished third in the regional to qualify as a team.

Shortly after celebrating their first trip to the state meet in four years in late January, the team got the news that they were caught in a COVID-19 contact tracing situation and would have to quarantine for 14 days, wiping out their chance to finish what they started back in July.

“The kids were devastated and so was I,” veteran Coach Bob Girani said. “They had worked so hard and had come so far since the season started. I told them I was very proud of them and that was it.”

Boyd thought otherwise. She’d had an idea in her head for a while and it was time to bring it out, so she started talking to her teammates one at a time.

“it started out as a joke within the team during the season that we were going to run a half-marathon in Greenville in March, but nobody took me seriously,” Boyd said. “I was very disappointed when we couldn’t run at state because I had timing goals I wanted to achieve and so did the others. I pushed the idea, and some were on board immediately, but others took some convincing.”

Boyd’s powers of persuasion prevailed, and the team was back in training exactly one week after their quarantine ended.

A half-marathon is 13.1 miles, more than four times longer than a cross-country 5K race, so extra training was in order. They met on their own after school, started with a five mile run, then added a mile a week.

“We did one long run each week during the cross-country season, so we were all still in decent shape,” Boyd said. “Coach Bob told us to add until we reached 10 miles, then our adrenaline would carry us the other three during the race.”

Coach knows best and that’s what happened when the group met two weeks ago at the Greenville Town Commons as all finished the race. Girani tagged along to see the season end in a most unusual fashion.

“Words really can’t describe how proud I am,” Girani said. “They would mention their progress to me once in a while, but they did it on their own. They weren’t ready to throw in the towel on their season, so they prepped, and they succeeded. They made themselves into runners over the course of our season and it’s fantastic that they ran one last race together.”

Boyd is glad the others committed to join her.

“We proved to ourselves that we could reach our goals,” she said. “Most of our per-mile split times and total race times were much better than we thought. It was definitely worth the extra training and it will carry us over to track season. Running 13 miles is an accomplishment in itself and we can carry it with us the rest of our lives.”