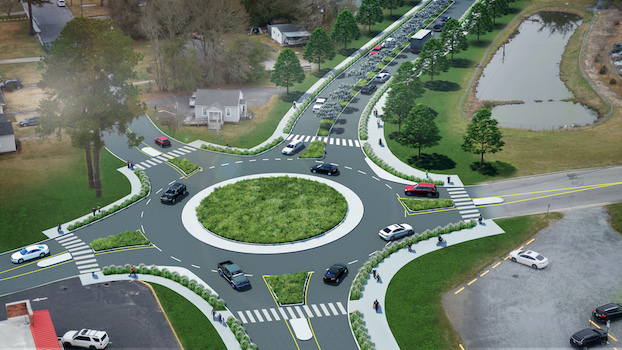 The roundabout where 15th, Brown and 12th Street intersect is part of the redesign plan for the 15th Street corridor from Brown to U.S. 17 Bypass/Carolina Avenue. (Stantec Engineering rendering)

Major improvements to 15th Street in Washington are on the way if the city council and the North Carolina Department of Transportation ultimately approve Stantec Engineering’s proposed redesign plans.

The city paid the Canadian firm $75,000 in November of 2020 to redesign one of the most dangerous roads in the state after a previous council voted against a DOT proposal four years ago.

“We hired Stantec to not only give us redesign options, but to involve the public and make this a transparent process, which it wasn’t last time,” Mayor Donald Sadler said. “I’m very pleased that so many (close to 1,500 according to Stantec) folks have been part of the process by taking our survey, commenting on the interactive map, by participating in the focus groups, and attending the virtual symposiums and workshops. I think we’ve gotten our money’s worth so far.”

The firm wrapped up a three-day series of virtual redesign workshops Thursday that unveiled significant changes to a 1.6 mile stretch of the 100-year old road from U.S. 17 Bypass/Carolina Avenue to Brown Street.

They included shrinking the current four lane road into one lane each way with dedicated left turn lanes and pocket medians, while staying within the current 60 foot right of way. Curbs and gutters will be moved in where asphalt is currently to allow for sidewalks/bicycle paths on both sides. The city will also move a sewer line under the road and make some utility improvements.

“Our most important goal with this redesign is to improve safety,” project engineer Mike Rutkowski said. “The current crash rate is way above average, and we need to solve that. The next thing is to make the corridor walkable, ADA compliant and bikeable. Also, it’s very important to slow down traffic on 15th Street and encourage thru traffic to use U.S. 264 going east and west. We want 15th Street to be for local traffic headed to work, the grocery store or the medical area.”

Stantec’s plan also includes a roundabout where Brown and 12th Street intersect with 15th, just south of Vidant Beaufort Hospital and a redesigned entryway as motorists cross U.S. 17 Bypass/Carolina Avenue from the east.

“Our traffic data shows the intersection by the hospital is the worst one for speeding and drivers running the red light that cause T-bone crashes,” Rutkowski said. “Installing a single lane roundabout is the safest way to solve that problem. You eliminate the light where 15th, Brown and 12th come together, and you will drive in the roundabout until you turn right onto whatever street you need to.”

On the east entry, it will provide a transition to help drivers realize they are entering a different part of town where they will encounter slower traffic and more pedestrians.”

The Market Street intersection along with several others, will also be updated with crosswalks, turning lanes and more functional traffic signals.

The heavy lifting lies ahead. Stantec will revise and refine their design options and put a cost estimate together over the next month before hosting an open house for more public comment sometime in May.

They will also work with the city council to approve the plan, then work with DOT to get it implemented.

“That was one of the parts that was missing during this process four years ago,” Sadler said. “We didn’t have any working relationship with DOT, and they just came in and told us what the plan was. That didn’t work, so here we are four years later trying to give them a plan we like and one they will pay for. We hired Stantec to work with DOT all the way until we all agree. I am pleased and optimistic so far.”

It’s still too early in the process to know how long it will take to finish, but Rutkowski is confident Washingtonians will like the final product.

“There are no silver bullets and there will be tradeoffs, but the final plan will be a good one” he said. “We’ve done this many times all over the state with DOT’s approval, so we are confident we can do it again for Washington.”