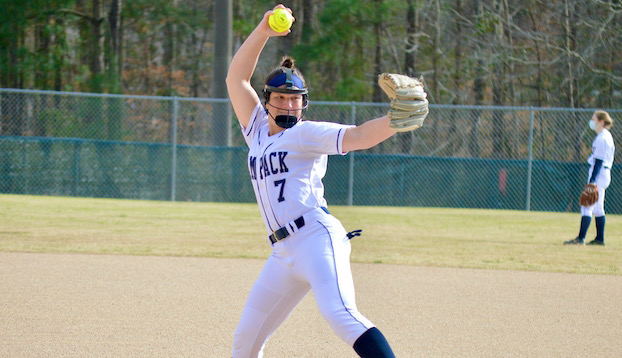 The Washington softball team is 3-1 after 18-0 and 13-0 victories over North Lenoir and Ayden-Grifton and a 9-8 loss at Bear Grass this week. Senior Savanna Craft and sophomore Erin Everett pitched a combined perfect game in the first win and Craft struck out eight and allowed two hits in the second.

Bear Grass came from behind to tie in the 6th inning and won the game on a walk-off hit in the 7th.

Washington has home games against South Lenoir and West Craven Tuesday and Wednesday.

Sydney O’Neal took medalist honors for the Washington girls with a 52 over nine holes at the Cypress Landing Golf Club. Washington defeated South Lenoir by 11 shots and West Craven by 21. Anna Shadle was second with a 56 and Anna Taylor tied for third at 57.

The Southside boys edged Northside by one stroke Monday at Cypress Landing.

Sophomore Gabe Matthews led the Seahawks with a 48, good for third overall while Northside’s Eli Huynh shot a 46 to finish two shots off the lead. Tarboro and Pamlico County also competed.

The Pungo Christian Academy softball team is 4-0 in conference play and 4-2-1 overall.  Junior pitcher Reagan Stoop earned the win in all four games, including 10 strikeouts in a 1-0 win over The Albemarle School. She tripled and scored the winning run on Melanie Rutledge’s sacrifice fly.

Stoop has two home runs, including a grand slam, while Rutledge and senior Riley Cutler have also gone deep for the Lady Raiders.