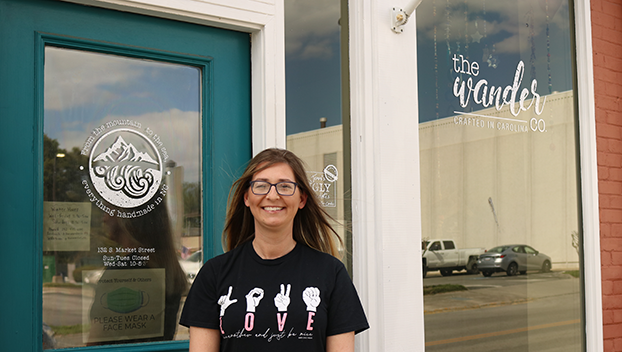 Washington residents have banded together to support local businesses through a group on Facebook called The Washington Cash Mob that is focused on giving back to the community.

Chelsey Greene, the creator and admin of the Facebook page, says she was inspired to create the group after seeing similar efforts in New Bern and Havelock.

“It was so inspiring to see how the communities there came together to support their small businesses, especially during these difficult times. I’m from Washington and our community has always been so supportive of local businesses, so I knew a cash mob page would do amazing here,” Greene said. “The page itself has brought attention to local businesses that members of the community may not have known about before, which has been a blessing within itself,”

Since the Facebook page’s creation on Feb. 18, almost 2,000 people have joined the group. Individuals in the group can suggest local businesses and a weekly vote is held to determine which suggested business will be the target of the mob for that week. Five local businesses have been mobbed so far.

“The response from local business owners has been incredible. They have all shown nothing but gratitude. A lot of people have reached out to me to thank me for creating this group,” Greene said. “I may have created the group, but I seriously could not do this without the support of every other person in the Washington Cash Mob page. I’m so thankful to live in a town that is supportive of our own friends and neighbors.”

Candace Bonney, owner of The Wander Co. on South Market Street, was the most recent local business owner to benefit from the Washington Cash Mob.

“Meeting new customers and seeing our regular customers come out and show us such support means the world. I hope that you guys will continue to spread the word about not only my shop, but all of the small businesses in Washington,” Bonney said in a post to Washington Cash Mob’s Facebook page. “This group is truly a blessing to us all and I just can’t thank you enough.”

Aside from the success of The Wander Co. mobbing, other businesses like Val’s Gourmet Baked Goods have received a large increase in sales. Val’s reported their highest number of weekend sales to date after the bakery was selected as the featured business on March 19.

“It was wonderful to see new customers and old customers come through this weekend. We truly appreciate your support of small businesses, not only for us, but for any small business. We hope that this won’t be your last time visiting Val’s or anyone else that got the Cash Mob blessing. Thank you Little Washington,” said Valerie Taylor Jackson, owner of Val’s Gourmet Baked Goods, in a post to the group’s Facebook page.

The Washington Cash Mob can be found on Facebook. Weekly polls are held every Tuesday and shopping or mobbing is encouraged on Friday. For more information, visit the group’s Facebook page.