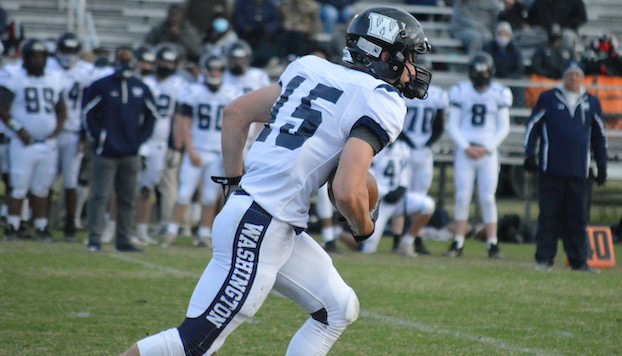 Snow Hill-Washington High School’s potent offense came to life with some help from the defense in the third quarter to defeat Green Central 38-26 Thursday night.

Washington was on the march early in the second quarter after Jaden Hambric reeled off runs of 30 and 22 yards but coughed up the ball on another fumble at the Rams 10 yard line. The defense forced a punt, which traveled only 15 yards, putting Washington at the Greene Central 25 yard line. Quarterback Hayes Pippen ran 21 yards to the four, then Hambric put the Pack on the board with a scoring run, to make it 14-8 at halftime.

“Give Greene Central the credit for a great first half,” WHS coach Perry Owens said. “They had a plan to stop specific plays and they did. We made some adjustments at halftime and got things rolling pretty quick.”

WHS started at midfield and the air assault began as Pippen completed a huge 12 yard pass to William Reid on fourth down, found Hayden Anderson for 10 yards, then dumped off a screen pass to Terry Moore, who took it 21 yards for the go-ahead score at 16-14.

Two plays later, Anderson scooped up a fumble and returned it 32 yards for a touchdown for a 24-14 lead.

Greene Central went three and out and Hambric scored on a 58 yard burst up the middle for a 31-14 advantage.

The defense recovered another Rams fumble, then Pippen hit Anderson on a 35 yard touchdown pass to put the cap on a 30 point quarter to ice the win. Greene Central scored two late touchdowns after the game was decided.

“Hayden and his family bought into the weight room and nutrition when he came here as a freshman four years ago,” Owens said. “He made plays tonight when we needed him. This was a classic trap game with Kinston ahead of us next week. He and other guys stepped up to make sure we’ll be playing them for the conference title on senior night next Friday.”

The Vikings and the Pam Pack are both 5-0 in league play and the winner will claim the automatic bid and higher seed in the state playoffs.

“Kinston is very well coached, and I’ll put my staff up against anybody’s,” Owens said. “We’ve both done a great job handling all the COVID-19 protocols and keeping our programs together. It will be a fun game with them next week.”

The Pam Pack rolled up 436 total yards. Hambric led the ground attack with 167 yards on 15 carries with two touchdowns. Pippen was 6-8 passing for 143 yards and two touchdowns, both to Anderson, who caught three passes for 84 yards.