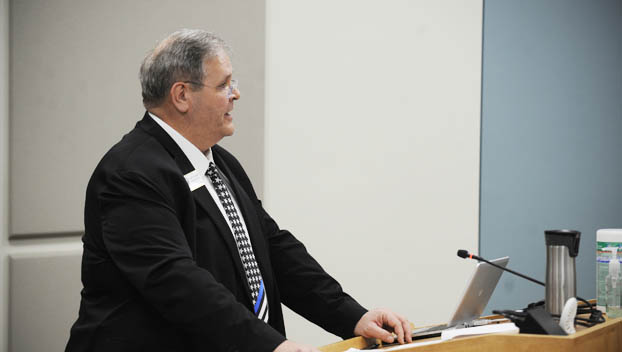 Five of seven Beaufort County Commissioners voted against dissolving a committee tasked with researching the feasibility of creating a county police force.

The three-person Beaufort County Police Force Committee is a research arm of the Board, and its meetings have largely consisted of preliminary discussions.  Specifically, the committee is asking if and how a county police department similar to that of Gaston County could be developed to take over law enforcement duties from the Sheriff’s Office.

The committee, which consists of commissioners Hood Richardson, Stan Deatherage and Randy Walker, is tasked with studying potential advantages and disadvantages of a county police force, and bringing their findings back to the rest of the commissioners. If the county eventually decides to move forward with establishing police force state legislation will be needed to establish the agency.

In a presentation at the county commissioners meeting Monday night, Kidwell expressed concern about the committee’s motives and said he wouldn’t support any legislation seeking to establish a county police department. Kidwell claimed that the commissioners were attempting to defund the Sheriff’s Office, alluding to the county police committee as well as Beaufort County Schools’ pending switch from the Sheriff’s Office to a private contractor for school resource officer services, a move that became necessary when Sheriff Ernie Coleman terminated an agreement between his office and the school system.

“If you defund our Sheriff’s Office,” Kidwell asked the commissioners, “if you spend hundreds of thousands of taxpayers’ money unnecessarily, if you reduce the protections to our citizens, if you place our children in danger, if you destroy the constitutional protections that only a sheriff’s office can offer, how do you reconcile that with your constitutional oath of office? You appear to be willing to sacrifice all this and more for your own interests and egos bigger than the county courthouse.”

“Defunding” is a term Coleman has used often over the past year.

During the 2020-21 budget process every county department was asked to bring in a tight budget, due to economic uncertainty caused by the COVID-19 pandemic. The commissioners allocated 107 positions to the Sheriff’s Office, five less than the previous year. The Sheriff’s Office had adjusted its budget in the previous year in order to give some if its staff salary raises — a move Chief Deputy Charlie Rose said would bring the BCSO more in line with comparable agencies. Richardson says Coleman committed an “illegal act” by giving those raises without permission from the commissioners.

The Sheriff’s Office had committed to bringing back a flat budget for 2020-21. With the salary adjustments in place, it had to leave five positions unfilled to keep the budget flat.

Coleman accused the commissioners of defunding those positions, saying that the loss of those five individuals would cause “a shortage of deputies on the road taking emergency calls for the safety of the people.”

Coleman later said that in order to properly handle transports and other tasks, the Sheriff’s Office needed to occasionally be able to pull its deputies serving as SROs from their posts during school hours. Previously, those deputies only engaged in non-school-related law enforcement duties outside of school hours. That’s why he deemed it necessary to terminate the memorandum of understanding with the school system.

“If we look at what’s being done, we’ve just taken 13 positions away at the sheriff’s level to put new law enforcement in our school system,” Kidwell responded. “… And we’ve actually formed a committee to consider changing to a Beaufort County police force. Is that not defunding the sheriff?

Deatherage told Kidwell that it was Coleman who terminated his office’s agreement with the school system.

“If I’m not mistaken, over the last several years we actually removed the sheriff controlling the front door at the courthouse, and we’ve lost some positions there,” Kidwell said. “We have a situation where we’re taking them out of the school system.”

“You’re saying things that are not true,” Richardson replied. “You need to be more honorable in your position.”

Kidwell also noted that the 13 new SROs provided by a private contractor wouldn’t have the same ability to help with off-campus law enforcement duties that current SROs have.

“I think what we’re actually looking at is a conglomeration of personality conflicts that don’t seem to get resolved, between people who are elected to do their best job to represent the people in this county,” Kidwell said. “And what I see is a complete failure in all related to this subject — (the commissioners), the school board as well as the sheriff himself.”

Kidwell said he’d be happy to serve as a mediator in a public meeting with all three parties.

On the topic of the county police force, Richardson said the committee is looking into the idea because of past “abuses of power” by Coleman. Kidwell said he was at the meeting to discuss the Sheriff’s Office, not Coleman himself. Kidwell said the Sheriff’s Office has constitutional protections that a county police force wouldn’t have.  He pointed to the sheriff’s ability to “stop other levels of governments’ overreach.”