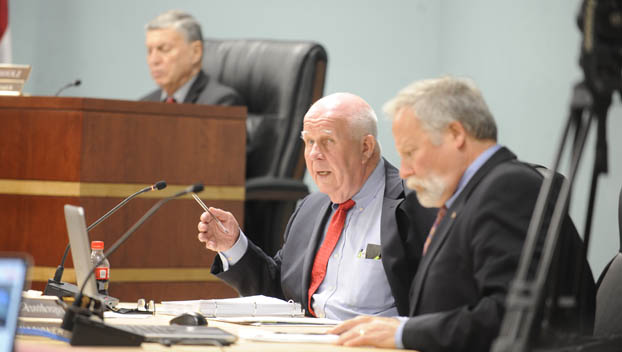 The Beaufort County Board of Commissioners weighed two options Monday night in regard to its projected $9.1 million intake from the $1.9 trillion American Rescue Plan.

The commissioners could give approximately $7.2 million of that money to RiverStreet networks in the form of a grant to build a broadband fiber network backbone in underserved areas of Beaufort County. Or, instead of spending a large chunk of the money on one project, the commissioners could hear requests from entities around the county and distribute the $9.1 million based on their suggestions.

Hood Richardson made the motion to institute the three months of public hearings. Frankie Waters, John Rebholz and Stan Deatherage also voted for it. Jerry Langley, Ed Booth and Randy Walker voted against it.

Richardson made his motion after County Manager Brian Alligood brought forth a recommendation for the commissioners to allow himself and County Attorney David Francisco to meet with RiverStreet and develop an agreement. Per the proposed terms of that agreement, the county would provide a grant and RiverStreet would build a fiber network backbone covering unserved areas of Beaufort County, as detailed in the “Fiber to the Home” engineering study the company conducted for the county in 2019. Areas in Belhaven, Chocowinity and Washington that already have broadband service wouldn’t be affected.

The county recently entered into a five-year agreement with RiverStreet, establishing a partnership dedicated to expanding broadband service to underserved and unserved areas of Beaufort County. RiverStreet was the only provider that responded when the county published a request for proposals to establish such a partnership.

“I believe this is a once-in-a lifetime opportunity to make an extreme impact on the health, education, economic development and quality of life in Beaufort County,” Alligood told the commissioners. “You’ve already seen the existing providers are not going to provide this service.

Alligood said the commissioners had a unique opportunity to pay for the network using federal money that wouldn’t have to be paid back. He also said that the cost of fiber is rising.

“It’s a lot of money, and it can do a lot of good for the people of Beaufort County,” Richardson said. “… That’s money coming into the county that can help everybody in this county, not just 660 people who don’t have broadband to their home. That’s just 660 people. That’s $10,400 per person that (RiverStreet) is offering to spend on this.

“I don’t know much about economics, but that don’t make sense to me.”

Richardson said that satellite internet services are rising in popularity, so the broadband network might soon be a “dinosaur.”

“(The American Rescue Plan) was a fully partisan plan; not one Republican signed onto it,” Deatherage said. “Not one, because they saw how much money it was going to be and how much money was not being used for COVID.

“So my feeling is, if we’re going to take this $9.1 million, we need to do what is best to serve every household, to whatever extent we can do that.

Rep. Keith Kidwell told the commissioners on Monday night that the General Assembly is “fully aware” of the need for rural broadband throughout the state. He said legislators are looking for ways to allocate more money to be used for that purpose.