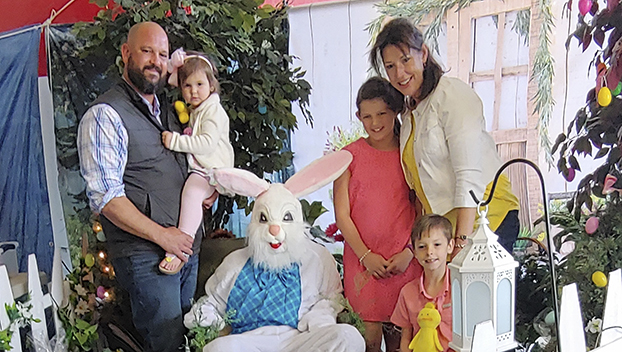 While his uncle and aunt were being judged during the BBQ competition, 4-year-old Shymire “Bubba” Spruill overcame his own shyness, and stepped away from the tent to receive a hug from the Easter Bunny. (Karen Thiel)

CHOCOWINITY —  Cars stretched onto N.C. Highway 17 last Saturday as fans of the Chocowinity Volunteer Fire Department’s well known BBQ fundraisers lined up to buy $8 plates and pork by the pound. Inside the fire house, dozens of happy kids from toddlers to teens enjoyed games and prizes featured as the finale of the first-ever Easter fundraiser held by Chocowinity’s volunteer Emergency Rescue Service.

A confirmed total was not available at press time, but event organizer Julie Parker, a paramedic and supervisor with the EMS division, said she and several helpers worked until 2 a.m. on Saturday, assembling and delivering Easter-themed orders ranging from $10 to $100 each. Before dawn, brightly colored candy-filled plastic eggs had mysteriously appeared on lawns and porches throughout Beaufort County, as well as in Easter baskets of all kinds, complete with a note from the Easter bunny.

The children’s event at the firehouse included egg coloring, games, prizes, and time with the Easter Bunny. At just over 6 feet tall, Bunny was easily found for hugs given to anyone wearing a mask, and spent several hours posing for photos with giggling children and their happy parents.

“The pandemic has taken so much away from us these last few months. It has inhibited our abilities to share fun times with our children and families. We were so excited to be able to offer the community some Easter fun,” Parker.

All donations from the fundraiser will be used to update or purchase new equipment for the EMS corps – everything from oxygen saturation monitors to the personal protective equipment that has become even more vital for EMS members since the onset of the Covid-19 pandemic.

Parker said that, even though the Easter fundraiser has ended, contributions from anyone who missed the opportunity will gladly be accepted and put to good use on behalf of the Chocowinity residents served by this crew. Interested persons may contact Chocowinity EMS by calling 252-948-2446.