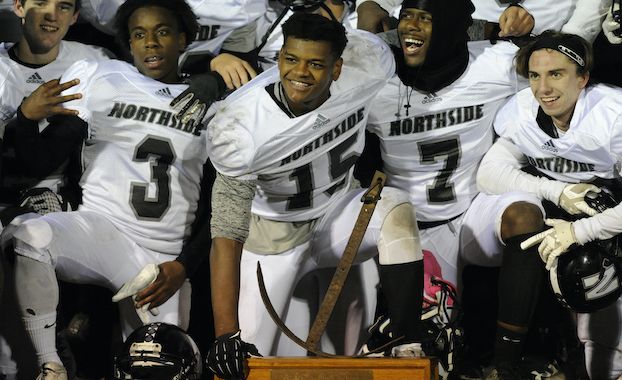 The biggest games of the COVID-19 delayed and shortened high school football season are Thursday night as Northside hosts Southside with a playoff spot and the Anchor Bowl trophy on the line, while Washington hosts Kinston for Eastern Carolina 2A conference title in the final week of regular season action.

“It is a very big deal to the kids on both sides,” Northside coach Keith Boyd said. “The anchor has been in our trophy case for a while now and we’d like for it to stay there. Of course, Southside wants it back. That’s the nature of this game.”

Bragging rights are one thing, but a chance to continue the season is also in the balance. The Panthers and Seahawks trail Tarboro and Pamlico County in the Coastal Plains 1A Conference and the loser has a good chance of its season ending Thursday.

“We know we are on the bubble, no matter what,” Southside coach Jeff Carrow said. “3-2 in the league looks a lot better than 2-3. We know what each other is going to do, so there shouldn’t be any surprises. We run the ball and so do they. Whoever executes the best will come out on top.”

The Panthers prevailed 17-12 at Southside earlier in the season and are coming off a tough overtime loss at Pamlico County. The Seahawks rolled up 479 yards rushing in a win at Riverside.

“You can throw what each of us did last week and against each other earlier right out the window,” Boyd said. “Both these teams want to make the playoffs and beat their rival. It will be fun just like it always is.” Kickoff is 7 p.m. at Northside.

Meanwhile, the title is up for grabs at Wagner Stadium as the Pam Pack, (4-1, 4-0) host the Vikings (5-0). Washington sports one of the top offenses in the East, averaging 464 yards and 41 points a game, while Kinston’s defense has not allowed a single point so far this season.

That’s right. Five games, five shutouts and an average of 37 points a game on offense.

“They look pretty impressive getting off the bus,” Washington coach Jeremy Owens said. “They are long, fast and tremendously athletic. We will be the underdog on our home field on Senior Night, but that’s okay. We’ve worked hard to put ourselves in this position and we are looking forward to the challenge.”

“We have enough flexibility within our offense to adjust when something’s not working, but we have to stay away from turning it over in the red zone” Owens said. “We’ve been our own worst enemy at times and are hard to defend when we hang onto the ball. Hopefully, it will be a great game between the two best teams in the league.” Kickoff is at 6:30 p.m.