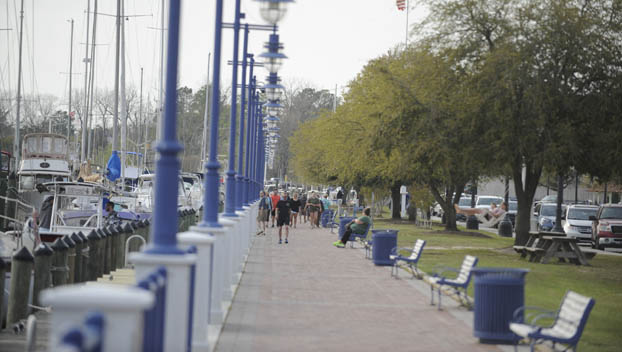 Local municipalities are enthused by a NCDOT study examining the feasibility of a Beaufort County-to-Ocracoke ferry service. This photo shows the Washington waterfront; City Manager Jonathan Russell said the old Belle of Washington dock could be used for a ferry service. (Brandon Tester / Washington Daily News)

Beaufort County Economic Development Director Martyn Johnson says a passenger ferry line between local municipalities and Ocracoke Island would be a “tremendous boon” for tourism in Beaufort and Hyde Counties.

In a new study, the North Carolina Department of Transportation is examining the feasibility of creating a passenger ferry line that would connect Ocracoke Island with areas that don’t already have ferry service, including Washington, Belhaven and other areas. The study is preliminary, and it will take approximately two years to complete.

Currently, Beaufort County residents need to travel to Swan Quarter or Cedar Island to catch a ferry to Ocracoke. A passenger ferry line — which carries pedestrians and bicycles but not vehicles, making it different than a regular ferry — already runs between Ocracoke and Hatteras Islands. The DOT is looking at offering similar services in its study, which is being conducted by N.C. State University’s Institute for Transportation Research and Education.

County Manager Brian Alligood said several local municipalities have expressed interest in the study by writing letters of support or asking to be involved with it. Those municipalities include Washington, Belhaven and Aurora.

During the county commissioners’ meeting Monday, Johnson spoke about the potential long-term benefits of a local ferry line.

“I think it also could maybe lead to a water taxi, which could connect all our communities like they used to be in the old days — Aurora, Belhaven, Washington all being connected with this one central hub,” Johnson said.

The commissioners approved a letter of support that the county is sending to DOT Secretary Eric Boyette. The letter is signed by Chairman Frankie Waters.

“Additional tourism would add to Beaufort County’s diverse economy by increasing the retail, events, recreation, arts, entertainment, hotel and restaurant trade in our county and historic communities,” the letter reads in part. “This additional trade could be the salvation for eastern Beaufort County and surrounding areas who have seen population declines as employment in manufacturing and agriculture has declined. The eastern areas of the county are part of the early history of N.C. with Native Americans settling the area before European settlers who created the first port in N.C. These areas are connected by roads but could also be served as they were historically by boat with a water taxi service.”