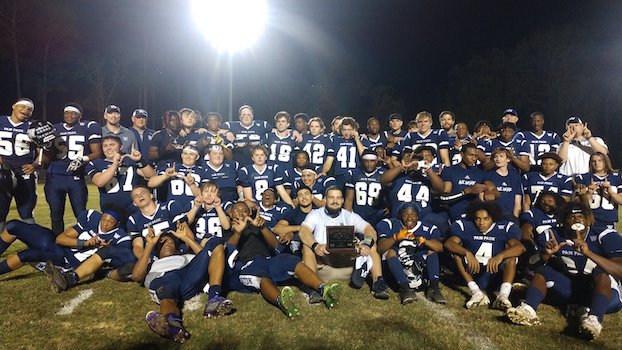 The Wagner Stadium crowd held its collective breath as Ridge Zerniak lined up for the most important extra point of his young life.

The clock showed 14 seconds and his team trailed by a point. The conference championship and a trip to the state playoffs were hanging in the balance as the junior’s right foot met leather.

Teammates, coaches and fans in the stands exhaled into a mighty roar as the kick sailed straight and true through the center of the uprights to tie the score at 43 and extend the Pam Pack’s (5-0, 5-1) rollercoaster battle with the Kinston Vikings.

The Pack had a chance to win on the previous play but had an extra man on the field. The five yard penalty moved the ball to the eight yard line, setting up Zerniak’s tying boot.

On to overtime the epic struggle went. Kinston was penalized on the kick, so the Pam Pack started overtime at the Viking five yard line.

Jaden Hambric bulled forward for four yards, then quarterback Hayes Pippin dove in from the right side. Zerniak’s PAT made it 50-43.

Kinston responded with a third down scoring pass and decided to go for a game-winning two point conversion. However, the snap sailed over the quarterback’s head, setting off a wild celebration after the most unlikely 50-49 WHS win.

“We had lost a coin flip with West Craven earlier in the day to decide who the second conference playoff team would be,” coach Perry Owens said. “I didn’t tell the kids until after the game, but our season would have been over if we didn’t come back to win. I am so proud of this team for not giving up when we were way down in the first half. Our program has come so far in the last four years and this conference championship is latest validation of their hard work and dedication.”

Kinston (5-1) entered the contest unscored upon during this COVID-19 shortened season. Terry Moore and Hambric had touchdown runs of 17 and 59 yards, but the Pack faced its largest deficit, 35-14 with seven minutes left in the first half.

“I pulled my offense together and told Walt (Gerard) to do the same with the defense,” Pippin said. “We knew it was time to start playing like we could. We had to stop them and score some points.”

Message received as Moore raced 53 yards to the four yard line, then caught a Pippin pass in the end zone for a 35-20 halftime deficit and a glimmer of hope.

“We just encouraged each other rather strongly to stay together and not give up,” Gerard said. “We said we had worked too hard in the weight room and outside in the summer heat to just roll over and quit.”

One play after the defense stopped Kinston on fourth down, Moore raced 48 yards to paydirt. Gerard added the two-point run and the Pack was within seven at 35-28.

On the next series, the Vikings opted to go for it on fourth and two from their own 25, but the pass fell incomplete.

“Our offense is built to score quickly, and our defense tightened up so we could,” Owens said. “We beat ourselves with poor execution in the first half, but thankfully snapped out of it in time.”

Kinston wasn’t finished and went on a time-consuming march aided by a pass interference call and regained the lead, 43-36 with 2:36 to play.

With the crowd in a frenzy, the Cardiac Pack responded one last time as Moore carried twice for 51 yards to the Kinston six with 20 second left. Pippen saw an opening around the left side and catapulted into the endzone for a 43-42 deficit with 14 seconds to go, setting up Zerniak’s boot to force overtime.

Moore finished with 241 yards rushing on 23 carries and three touchdowns, while Hambric had 126 on 14 carries with one touchdown. Washington had 481 total yards including 441 rushing.

State playoff pairings will be announced over the weekend.