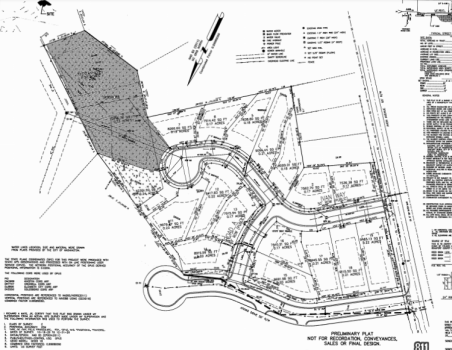 The Powell Place plat presented to City Council on Monday includes 18 lots. The shaded area on the plat represents a recreation area that the city would eventually be given the option to purchase from the developer. As drawn, lot nine — which sits at the top of the shaded area — would only be accessible by way of Camelia Drive in the Macswoods subdivision. (City of Washington)

The couple looking to redevelop the property that houses the defunct Racquet Club of Washington into an 18-lot single-family residential subdivision will have to wait at least another month to move forward with their plans.

Bill and Dale Peele watched as a motion to approve a preliminary subdivision plat for the parcel failed with a 2-3 vote by the Washington City Council. Councilmembers Betsy Kane and Virginia Finnerty voted for the motion; William Pitt, Mike Renn and Ed Brooks voted against it. Mayor Donald Sadler recused himself from the agenda item.

Most of the parcel is zoned office and industrial, and the rest is zoned residential. The preliminary plat shows 18 lots as well as a recreation area. The new neighborhood would be located near the corner of Avon Avenue and Atkins Drive.

The Peeles are retaining Inner Banks Engineering to help with the development. Engineer Marie Peedin presented the plat to City Council on Monday. She said there is a “dire need” for more housing in Washington.

“You can talk to any realtor, any developer, city staff — many people in this town are saying, ‘Hey, people should move to Washington.’ And it’s just not happening,” Peedin said.  “So someone coming in wanting to subdivide land and provide housing I think is a great thing.”

Several people came forward during the public hearing period to urge City Council not to approve the plat, citing concerns ranging from ordinance compliance to density and traffic issues.

Gary Phillips, an Atkins Drive resident, said the neighbors surrounding the property are “unanimously opposed to the plan as it is currently drawn.” He spoke about three areas of concern: compliance with the city’s zoning ordinances, compliance with the city’s subdivision ordinances, and “a lack of clear, consistent and verifiable information.” Phillips said the neighbors view the current plat as being too congested, adding that a plat with 10 to 12 homes would be more feasible.

Bill Peele said the developers were originally planning for 22 lots, but ended up trimming it to 18. He said cutting back any further would diminish the economic feasibility of the project for the developers.

Jerry Boone, and Avon Avenue resident, mentioned concerns about a potential increase in traffic that could stem from the new development. Boone said he’s observed drivers consistently exceeding the speed limit in that area.

Peedin said a quick traffic study was conducted in response to similar concerns. That study revealed that approximately 800 vehicles travel that road per day, which, Peedin noted, is comparatively less than Brick Kiln Road (3,600 vehicles per day) and is close to Smaw Road (600 vehicles per day).

Peedin used trip generation calculations to estimate how much traffic the subdivision would bring to the area, which summed up to 182 trips per day. She compared that to a 50-unit apartment complex, which would add about 333 trips per day.

Two connected lots totaling one acre on the plat were designated as a recreation area as required by city ordinances. The city would eventually be given the option to purchase the recreation area. The developers subdivided the area to accommodate future uses in case the city doesn’t exercise that option.

Those two lots — lot eight and lot nine — stick out from the rest of the neighborhoods on the plat, so much so that lot nine would only be accessible by way of Camelia Drive in the Macswoods subdivision, and not through the proposed development.

Kane noted that Camelia Drive is narrow, and she questioned if it would meet the standards set forth in the city’s subdivision ordinances if connected to Powell Place.

Peedin said a long driveway could be created in order to allow for access to lot nine through the proposed development. She said that combining the two lots would also solve the accessibility problem.

“(The Macswoods road) would not meet your subdivision ordinances of today,” Peedin said.

Renn said he saw some ambiguity that would make it difficult for him to decide how to vote on the proposal.

“Technically it meets the requirements,” Renn said. “But I guess the question would be is there further discussion between those groups that would lead to better positioning for those groups, so the developers can move forward and do well and the neighbors can get some of their general concerns addressed?”

Finnerty eventually made a motion to approve the preliminary plat, on the condition that lots eight and nine would be combined, lowering the total amount of lots to 17. No one seconded the motion.

“Yes, but I don’t have to make a second,” Kane responded.

“These people are trying to do business and we’re holding them up,” Finnerty said after an extended pause.

City Attorney Franz Holscher advised Council that it needed to either arrive at a decision or provided guidance if the agenda item was tabled until the next meeting. Finnerty then restated her motion, Kane seconded the motion, and Council voted against it.

Frustrated, Finnerty asked why three councilmembers had voted against the motion.

“What is the rationale when we were told they followed the rules, they did everything they were supposed to? I need to know,” Finnerty said. “I don’t understand. It’s very frustrating to me to see people try to do something right by this town. They do everything they’re supposed to, and you sit here and say no to them.”