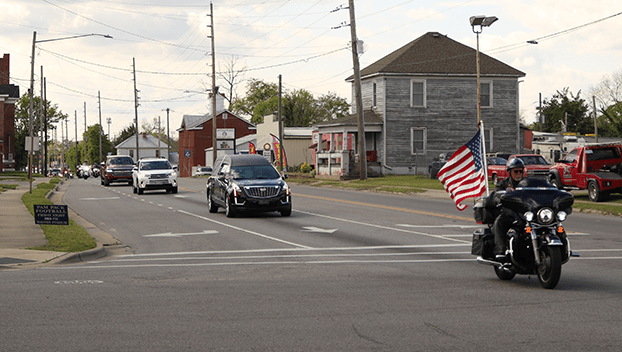 MOTORCADE ESCORT: Hodges' remains were escorted from Norfolk International Airport in Norfolk, Virginia to Joseph B. Paul and Washington Funeral & Cremation in Washington by the Patriot Guard Riders and numerous law enforcement agencies. His service is on Saturday at 11 a.m. with burial to follow. (Chelsea Hofmann / Washington Daily News)

While the U.S.S. West Virginia was later refloated and repaired in 1942 and 63 men were found in the wreckage. Those who could not be identified were buried at the Punch Bowl Cemetery. These unidentified remains were exhumed by the Department of Defense and Hodges’ family was asked to submit DNA samples for genetic testing.

“In 2015, I asked an Air Force Major assigned to me what the likelihood of my brother being identified was. He said it was a very good chance. About five years later, I had all but given up hope of Howard being identified,” said Lindbergh Hodges, the youngest brother of Howard.

Eight years after the initial DNA samples were taken, Hodges was officially identified on October 15, 2020. Six months later, his remains have finally returned to Beaufort County.

“It has taken almost six months of working with the Department of Defense in planning to return Howard home to his final resting place. A lot of red tape, but they have been very cooperative,” Hodges said.

Hodges’ remains were escorted from the Norfolk International Airport in Norfolk, Virginia to Joseph B. Paul Jr. and Washington Funeral & Cremation in Washington on Tuesday. The Patriot Guard Riders, along with local law enforcement and representatives with the Department of Defense, escorted Hodges and his family to the funeral home.

A public service for Hodges will be held on Saturday, April 17, 2021 at 11 a.m. in the chapel of Joseph B. Paul Jr. and Washington Funeral & Cremation. Burial will follow the service at Oakdale Cemetery, where Hodges will be laid to rest alongside his parents.