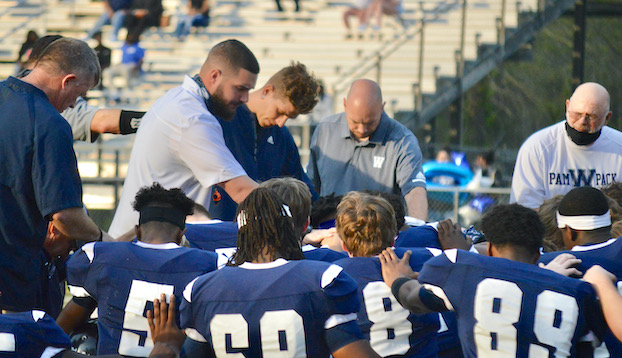 Washington High School’s Perry Owens and junior Terry Moore were named the Eastern Carolina 2A Conference Coach and Player of the Year earlier this week.

The conference coaches picked Moore unanimously, while the 30-year old Owens won by a 6-1 vote. The complete All-Conference team will be announced after the state championship games.

“I think the other coaches were surprised that I was surprised when I won,” Owens said. “I voted for Coach Gieselman from Kinston because he runs such a great program and I thought West Craven might have shot also. I’m proud to win at such a young age, but I have a great staff and players. We all work together really well and it’s a fun group to be part of.”

Owens is in his first year as the head coach after three as the offensive coordinator. He was part of Old Dominion’s first recruiting class after graduating from John A. Holmes High School in Edenton in 2009.

The Pam Pack is 5-1 going into Friday’s home playoff game against South Granville and average 475 yards and 43 points a game in Owens’ high-powered offense.

Moore is the prime catalyst in that offense, averaging 13.2 yards every time he touches the ball. The 6’1, 185 lb. junior speedster has rushed for 977 yards and six touchdowns, with three pass receptions for two more scores.

He made multiple big plays in the 50-49 comeback win over Kinston to claim the Packs’ second straight conference title and found the end zone three times.

‘He is the complete package,” Owens said. “He has a 4.3 GPA, he’s an outstanding young man and he leads our team in rushing, total offense and points scored. He’s also the ultimate team player who will do whatever it takes to help us win. He always credits his offensive line and other teammates for any individual success he has.”

Moore has grown two inches and packed on 25 pounds since joining the program as a freshman.

“He and his family have bought into what we’ve tried to get the kids to do nutritionally and in the weight room,” Owens said. “He’s had great support at home with academics and he’s worked himself into position to play at a high level in college. Power 5 schools are starting to take notice and we have to continue to find creative ways to get him the ball within our offense.”