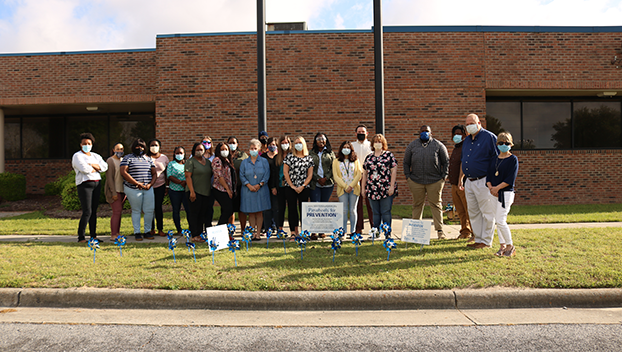 In honor of Child Abuse Prevention Month, the Beaufort County Department of Social Services planted a pinwheel garden at their facility to bring attention to the growing number of children facing abuse.

The pinwheel garden is part of a national campaign, Pinwheels for Prevention, which began in 2008 under the Prevent Child Abuse America organization. According to PCAA, pinwheels were chosen to represent the childlike qualities of whimsy and lightheartedness and the program serves to promote a happy and healthy environment for all children across the country.

The Beaufort County Department of Social Services has received an increase in reported abuse according to deputy director Lori Leggett. She attributes the rise to children returning to the classroom as restrictions are loosened regarding the pandemic.

“When the pandemic hit, that was one of the first things that everyone was panicked about. We were worried about how we would get reports and who would report to us if they don’t see the children that are really isolated,” Leggett said. “We did see a dramatic decrease in reports during the pandemic because these children were learning remotely. When the restrictions started to loosen, the number of reports definitely increased. There are a lot of complex issues that these children are going through and we just want to make sure that the children of Beaufort County remain safe.”

At the beginning of the pandemic in March of 2020, Beaufort County D.S.S. received a total of 43 reports. As things started to pick back up in terms of in-person learning around September of 2020, Leggett says the number of reports increased to 75. As more cases come in, the social workers at D.S.S. screen the reports to ensure cases are investigated properly.

“The severity of the cases are more complex. We’ve seen a lot of opioid and drug use, a lack of mental health treatment, and really bad truancy issues with school. It has increased our foster care numbers with children that we’ve had to bring into custody which is the last resort and not something we want to do,” Leggett said.

According to Leggett, teamwork is essential in preventing child abuse. Because of this, the pinwheel garden is an important part of raising awareness throughout the community to ensure prevention.

“Child abuse prevention is a shared community response. Without the community coming together, there’s no way for us with the D.S.S. to protect children,” Leggett said. “If people have or know a child that they suspect is being abused or neglected, they need to call our agency. That’s the biggest thing in terms of prevention, it really is a community effort to make sure all children are safe. We have a lot of great partnerships with other community agencies and these are so important when it comes to protecting children as one community.”