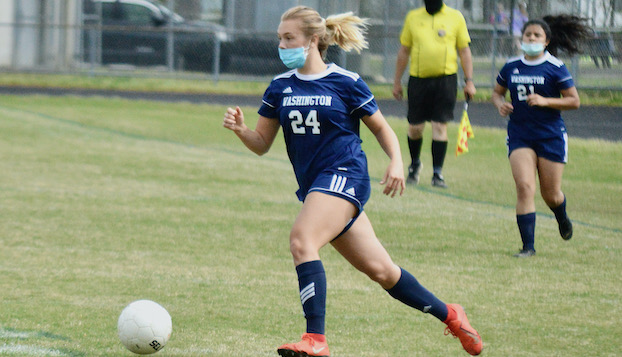 A lot has happened since April 30, 2013, but none of those events includes a conference loss for the Washington High School girls soccer team.

The streak began at the end of a 6-8 conference season when the Pam Pack was a 3A program.

Washington bounced back from a 4-0 loss at D.H. Conley with a 9-1 rout of South Central and still haven’t lost in league play despite a classification change and two (about to be three) different conferences.

“It’s just really hard to find consistently competitive 2A girls soccer programs in our area,” ninth-year head coach Ed Rodriguez said. “There are definitely some in the East, but they are too spread out to make sense to be in a conference with them. We’ve been blessed with one or two dedicated players every year and that’s been a big reason for our success in whatever conference we’ve been part of.”

WHS has posted some impressive numbers during the run. They’ve outscored their opponents 468-34, have won 37 by shutout and half (29) of their victories have come by the nine-goal mercy rule.

In 2014, they didn’t allow a single goal in eight league games and have given up only one in four conference contests so far this season.

“I am a stickler for defense,” Rodriguez said. “You can’t lose if the other team doesn’t score. I’d rather win 3-0 than 5-1. Our offense gets a lot of attention, but defense is the foundation on which our success is built.”

WHS has made the playoffs every year during the streak, with three trips to the second round and one state championship game appearance, a 2-0 loss to West Stokes in 2014.

“We lost one starting forward to an ACL injury in the fourth round and the same thing happened to another forward in the semi-finals,” Rodriguez said. “We gave up both goals near the end of the match when we were running on fumes.”

There were no conference games last spring because of COVID-19 after the Pack started 2-1-1.

“Last year’s team, particularly the seniors, got robbed,” Rodriguez said. “I felt bad they didn’t get to finish what they started, and it cost all of them valuable development time. We usually play around 20 games, but we had four last year and 10 this season, so this is the first year for nine of my 15 players.”

This year’s team is off to a 4-0 league start and have outscored their opponents 39-1, behind senior Lilly Francis Lobos and sophomore Taylor Mitchell.

Lobos poured in 48 goals as a freshman and 57 as a sophomore, before COVID limited her to eight last year. She is the WHS all-time leading scorer, boys or girls, and  has nine with six assists so far in 2021, while Mitchell has a team-high 22.

“Everyone has improved so far,” Rodriguez said. “We have to use the whole roster to get everyone ready in case there is an injury. Lilly Francis, Becca Zerniak, Stella Frisbie, Heba Alsudani and Anissa Kim are our seniors and they have done a good job with leadership.”

Wilson Beddingfield is the opponent who has come the closest to ending the streak. The Pack won 2-1 and 3-1 during the 2016 season.

“It’s meaningful and a source of pride,” Rodriguez said of the streak. The players know about it but have stayed focused on playing. I tell the seniors that high school is about memories and that’s a pretty good one to take with them.”