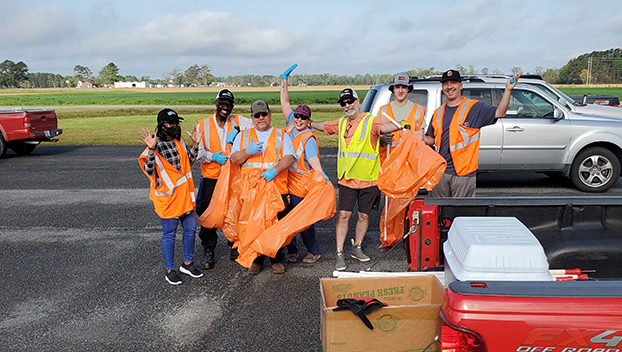 CLEANUP CREW: 14 volunteers with the city participated in a roadside cleanup effort on the morning of April 10. Over 29 bags of debris and trash were collected from the area surrounding Leggett Road in Washington. (Photo submitted by Dawn Maye)

The City of Washington’s Public Works department recently worked with the N.C. Department of Transportation to coordinate a roadside trash cleanup project.

The 14 volunteers involved with the cleanup, which was a part of a larger statewide effort held biannually by the N.C.D.O.T., focused on a portion of Leggett Road in Washington.

“We sent out flyers to all the city employees and we had 12 employees, the city manager and councilman William Pitt,” said Dawn Maye with the City of Washington Public Works department. “We picked up about 29 bags of debris and garbage that was on the side of the road that day.”

This cleanup comes at a time where Washington and the rest of Beaufort County are experiencing a high volume of roadside trash and debris. Officials with the D.O.T. and county have reported an increase in complaints regarding the amount of trash along major roadways like U.S. Highway 264.

“Everybody really just wanted to be out there to make our city look a lot better,” Maye said. “When you drove down the road the first time, you didn’t think there was a lot of garbage there but when you got walking and saw how filled up the ditches were, you saw how bad the problem was. We got in the ditches to get it out and everybody worked together and it was nice.”

Cleanup efforts like these had been previously canceled due to the ongoing global pandemic and statewide budget cuts. The D.O.T. currently plans to have one pickup by contract before July 1 of this year and will reevaluate their plans after July 1 once the new state fiscal year is in place.

“The D.O.T. provided all of our sticks to pick up the garbage, along with the safety vests and the bags so they were really helpful,” Maye said. “With the amount of people we had, people don’t realize it but it really doesn’t take that long. If you go out there with a good group of people, you can get it done quickly.”

These items are available through the D.O.T. to any group of people who volunteer to remove litter from roadways. For more information about D.O.T. cleanup efforts, visit their website at ncdot.gov.