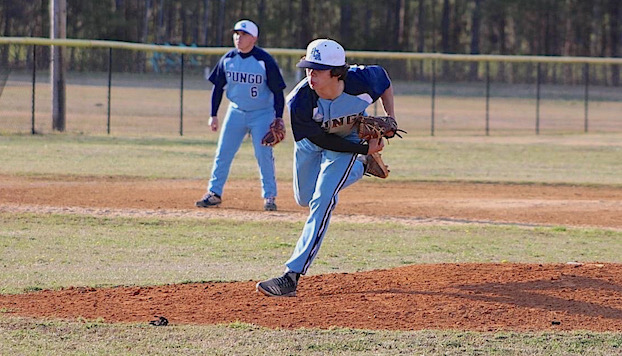 Junior Devin Cadle pitches in a game earlier this season. (Heather Garrish \for the Daily News)

Tuesday the Raiders fell to Halifax Academy 19 –9, after leading 8-7 into the bottom of the 4th.  but Halifax rallied for four runs in each of the next three innings Juniors Fortino Beltran and Josh Reynold went 2–3 with two stolen bases.

Thursday the Raiders dropped a heartbreaker to Ridgecroft School 5 –4. PCA led 4–0 after three innings, but were held scoreless the rest of the way. Ridgecroft scored twice in the top of the 7th for the eventual winning runs. Cadle struck out eight in six innings. Josh Reynolds, Deacon Etheridge and Drew Van Staalduinen each went 1 – 3 on the day and Etheridge drove in two runs for the third consecutive game.

The Raiders golf team lost to Ridgecroft School 128 to 135 on their lone match of the week on Tuesday. Senior Caeden Lyons led all golfers with a 38 on the day. Lyons is ranked 4th among NCISAA 1A golfers according to ShotStat and the Raiders team is now ranked 2nd in NCISAA 1A behind Crossroads Christian. The Raiders have already locked up a regular season championship, which is now their 7th consecutive TIC title.

The Lady Raiders ran their conference record to 8-0 and 8-3-1 overall with three wins this week, 10-0 over Northeast Academy and Ridgecroft and 7-5 over Lawrence Academy.

Sophomore Reagan Stoop had 25 strikeouts in 17 innings pitched. Senior Lauren Kellie Ricks led the way at the plate with six hits including a triple.