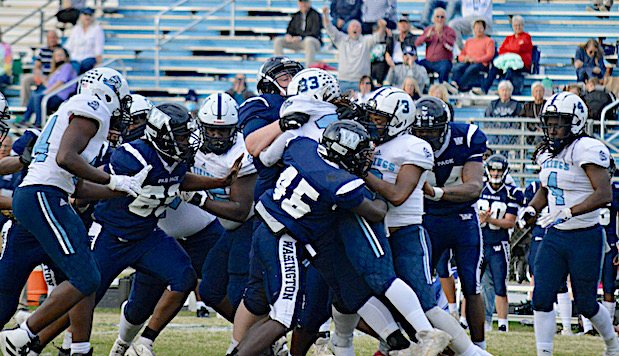 “They are like the Green Bay Packers were under Vince Lombardi,” Owens said of the Croatan Cougars. “They are a big, physical, here it comes try to stop it sort of offensive football team.”

“They use two tight ends and like to ground and pound,” Owens said. “They run about four plays out of two sets and dare people to stop them. They like to stay in the huddle and milk the clock on every play. They are the most physical, hard-nosed, old-school football team we’ve played all year and we will be challenged defensively.”

Both teams have similar offensive numbers. Croatan averages 44 points a game to the Pack’s 42. WHS averages 383 yards rushing per game to the Cougars 369.

The difference is through the air. WHS junior Hayes Pippin averages 100 yards passing per game, while the Cougars average just 40.

Croatan QB Dustin Hayden is the teams’ second-leading rusher with 469 yards and 13 touchdowns, behind senior Colton Sullivan, who has 782 yards and 13 scores. Five different backs carried the ball in the first round and all five are over 300 yards for the season.

Washington counters with the 1-2 punch of junior Terry Moore (1128 yards, seven TD’s) and senior Jaden Hambric (882, eight TD’s) who average a combined 11.8 yards every time they run the ball.

“Our offense is versatile enough to cause problems,” Owens said. “Our triple-option and spread have improved every week and Hayes has been throwing the ball really well lately. We’ve been our own worst enemy with red zone turnovers and penalties. We’re looking to clean those up and put on a good show Friday.”

Kickoff is at 6:30 p.m. from Wagner Stadium. The winner moves on to play the Southwest Edgecombe-St. Paul’s winner in the East regional final April 30. Washington would host that game if they advance.