School board to vote Thursday night on SRO contract 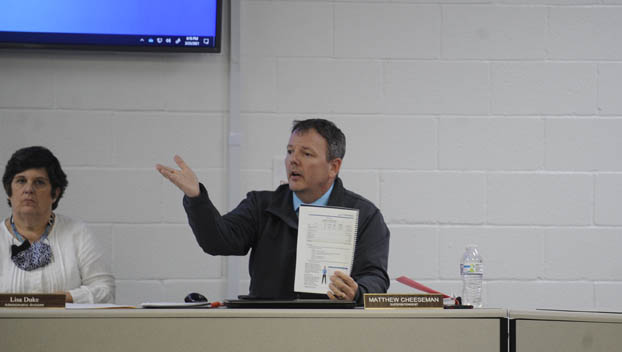 The Beaufort County Schools Board of Education on Thursday evening will review and vote on a proposed three-year contract for school resource officer services.

The emergency special called board meeting will begin at 5:30 p.m. Thursday at 845 N. Pierce St. in Washington.

The proposed contract is between the school system and Allied Universal Security Services. Deputies from the Beaufort County Sheriff’s Office currently serve as SROs throughout the district and will continue to do so until the new fiscal year begins in July.

Citing operational strains that he says were caused by the county commissioners defunding five of the Sheriff’s Office’s positions during the budget process for the current fiscal year, Sheriff Ernie Coleman terminated the memorandum of understanding through which his deputies provided those services. The deputies are still serving as SROs, but they can now be pulled temporarily from their school posts to help with other law enforcement tasks. When the memorandum was intact, the deputies only attended to those other duties outside of school hours.

The school system published a request for proposals for SRO services. The Sheriff’s Office did not submit a bid. After interviewing several potential contractors, the school board decided to go with Allied Universal.

The contract states that Allied universal will provide 13 duly sworn law enforcement officers to work in the district. Twelve of those officers will work as SROs at most of the county’s 14 schools, the exceptions being the Ed Tech Center — which is housed on Southside High’s campus — and Beaufort County Early College High School. One officer would serve as chief supervisor.

The preliminary contract included a $1.08 million annual price tag. That price included $218,400 to cover vehicle costs for the 13 officers.

At the April 13 school board meeting, Superintendent Matthew Cheeseman said Allied Universal was “very open” to moving away from SUVs and instead looking at purchasing a “more standard car,” which would lower the school system’s vehicle costs.

In March, the Beaufort County Commissioners committed $1.95 million — $650,000 annually for three years — to help fund the new contract. The $650,000 annual commitment is $91,000 more than the county has allocated in its current budget for the school system’s SRO services contract with the Sheriff’s Office, with vehicle costs included. Over a three-year period, that’s an increase of $273,000.