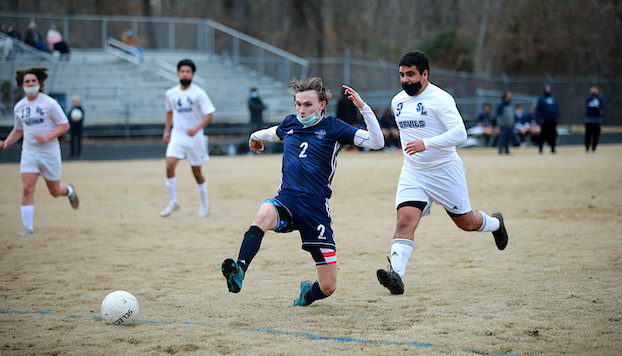 Senior Brandon Cox was one of six Washington High School players to make the Eastern Carolina 2A All-Conference team. (Bobby Davis/ for the Daily News)

Six players represented Washington High School on the Eastern Carolina 2A All-Conference team as voted on by the coaches.

Seniors Brandon Cox, Seth Davis and Bryan Martinez repeated their selection from 2019, while classmate Luis Ramirez, junior Ridge Zerniak and sophomore goalkeeper Rogelio Cano made it for the first time.

“All of them worked extremely hard and earned their recognition,” coach Jim Kozuch said. “This group battled through COVID-19 restrictions, rode the bus to most of the matches and practiced in horrible weather without complaining. The seniors put the time in to have a successful season and will be tough to replace.”

WHS finished 10-0 in winning their eighth straight league title and finished 13-1 after a third round loss in the state playoffs.

Kozuch credited Cano for helping the team go deep in the playoffs while keeping a low profile.

‘He did a great job in his first year on the varsity,” Kozuch explained. “The only goals he gave up in conference play were to Greene Central, (a total of four in 10 games). “He is great at stopping shots down low and he can get up to deflect or catch them in the air. He also has a heck of a foot. It’s a plus when your goalie can kick the ball deep.”

The coaches voted Greene Central’s Ariel Nunez as the Player of the Year, but didn’t vote to name a Coach of the Year.