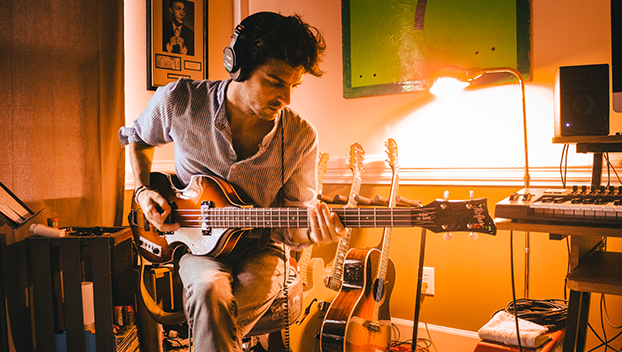 Ahead of his latest album’s release, Washington native Chuck Phillips spoke about the inspiration and process behind the writing, recording and producing of his new album, Act I: Scene II.

“The silver lining of COVID was that it gave me some time to take a breather, hang out at the house and I started writing some songs,” Phillips said. “I set up a home studio at my house and I started recording 11 new original songs that I wrote. I started in March and I finished right at the end of December.”

Over the course of these nine months, Phillips experimented with a new way of recording that was very different when compared to the production of his first studio release, 2018’s Tragic Beauty.

“With my first album, I had Session Musicians come in to play the drums and other instruments that I don’t play,” Phillips said. “Recording this album at home during lockdown, I started playing all the instruments myself. I really didn’t go out much or leave the house for a couple weeks so I started experimenting with playing all the instruments myself just because I didn’t have anything else to do. That’s how I made the whole album is playing everything.”

In addition to writing and recording the tracks himself, Phillips also produced all 11 songs. Two singles were released ahead of the album, with the most recent being Got Me Praying, a track with a bluesy, easy listening type of sound.

“Got Me Praying, which is the single I’ve got out to promote the album, features Craig Woolard of The Embers on saxophone,” Phillips said. “It’s getting some airtime on the radio in England, it was picked up on a five week rotation on Pirate Radio. It’s an internet radio station and I don’t know how they found it but they play it now and it’s been put on a couple Spotify playlists as well.”

The 11 songs on Act I: Scene II run at just over 46 minutes long. From the opening notes of the first track, Here in America, to the more up-tempo final track, Party Down The Street, Phillips says he wanted to create a cohesive album experience.

“I set it up to have a theme of a theatre and the photos we used for the cover were taken in the old Vaudeville Theatre at the Turnage. It’s got kind of an opening where you feel like a curtain is opening on a play and the album is set up to run that way,” Phillips said. “There’s a track right in the middle called Intermission and the last track kind of has a closing feel where it all resolves. The very last thing you hear is a door closing at the end of the album. My hope is that people sit down and listen to this album all the way through. That’s how I’ve set the tracks up and written and recorded it.”